"Wrath of the Villains: Mr. Freeze"

"I can freeze you, like we planned. I can bring your temperature down to 200 degrees below zero, and I can stop this disease from killing you."
—Victor Fries to Nora Fries

"Wrath of the Villains: Mr. Freeze" is the twelfth episode of the second season of Gotham. It aired on February 29, 2016.

Penguin takes a hit for Galavan’s murder, but doesn’t let Gordon off easily. Meanwhile, Gordon and Bullock investigate the body-snatching spree of Victor Fries, one of Gotham’s preeminent cryogenics engineers.[3]

A month after the events of the previous episode, Jim Gordon appears to give his testimony to led by Harvey Dent and Captain Barnes to clarify his actions on the night Theo Galavan was killed. With images of the murder of Galavan cutting through his head, Jim answers each of the prosecutor's questions, attributing what  happened to Penguin. When the testimony ends, Gordon is exonerated of any blame for Galavan's death, and reinstated as a Detective. Gordon goes home with Leslie Thompkins while Barnes and Dent watch together from above, skeptical of his innocence. Meanwhile, the GCPD carries out an intensive search to capture the Penguin, while the media continues to wonder who is the new boss of the underworld.

At Penguin's base, Butch kills a man with his hand-drill in his role as the new king of Gotham. After being left alone, Tabitha Galavan quietly approaches him, offering the proposal of an alliance. Butch rejects it, remembering what she did to him, but the sexual chemistry between them ends up making him change his mind. The pair share a passionate kiss, unaware that Selina Kyle is spying from a ventilation gap.

Simultaneously, the police are issued with an alert for the kidnapping of a man, and a GCPD officer stops Victor Fries as he suspiciously puts something in the trunk of his blue van. After asking to see the inside of Victor's trunk, the officer sees the kidnapped man completely frozen in the trunk of the vehicle. She tries to stop Victor, but he rushes to get ahold of his gear, freezing her from head to toe with a cryogenic gun before escaping.

The next morning at the GCPD, Jim arrives and Bullock quickly tells him about the case of the lunatic who froze the officer the night before. To initiate the investigation, they go to Edward Nygma who, after experimenting, concludes that the attacker would be using liquid helium to easily freeze human victims. Harvey insults Ed for asking unrequited questions, but after seeing Ed's uncharacteristically aggressive response, Bullock apologizes. Nygma makes a list of the companies in the city that manufacture liquid helium, but before leaving, Gordon interrogates Ed about his relationship with Penguin. Ed clarifies that he made a mistake in helping Penguin, believing that he would change, but the conversation is interrupted by an unexpected uproar in the main area. There they see Captain Barnes arriving, dragging Cobblepot directly to a cell, and berating the other GCPD officers for clapping. Gordon approaches Barnes, and the latter tells him that they'll finally know the truth about the murder of Theo Galavan.

In the interrogation room, Barnes is face to face with Penguin, interrogating him to see if Gordon was involved in the death of Theo Galavan, but Cobblepot confesses to the murder, claiming insanity. Afterwards, Captain Barnes meets with Jim in his office to inform him Cobblepot had backed his testimony. However, after welcoming Jim back, he tells him that he is trusting him, and not to make a fool out of him.

Meanwhile, Victor returns home, where his dying wife Nora is still asleep. When she wakes up and notices his demeanor, he confesses that he is having trouble reanimating the "mice" with which he is experimenting. Nora laments the suffering of the poor mice, and Victor evades the question. Despite these setbacks, he promises to advance his efforts to freeze her in order to stop the disease that is killing her.

At the GCPD, Bullock informs Gordon that only Wayne Enterprises made liquid helium in the city, and in the last month, there have been three other abductions by the suspect in the blue van.

At his home, Victor goes down to his lab to continue attempting to reanimate his frozen victims. He begins to reanimate subject A14, raising his body temperature.

Ed checks a file cabinet near Penguin's cell to check on him. Ed agrees to visit Gertrud Kapelput's grave and to bring lilies, before an officer appears to take Penguin  to Arkham Asylum.

At a diner, Lucius Fox informs Gordon and Bullock that Wayne Enterprises did manufacture liquid helium as a part of their cryogenics program, but Thomas Wayne had shut the program down, along with a few others, for unknown reasons.

At Arkham Asylum, Penguin reaches the cafeteria and is hit in the face with food thrown by another inmate. Jeers from the other inmates follow, notably a patient named Nigel. Annoyed, he stands in the middle of the room to declare that, as the king of Gotham, he's a powerful person. But contrary to his expectations, the mocking only intensifies.

Victor briefly thinks the latest version of his freeze formula has finally worked, but to his frustration, the body of his victim ends rotting in an accelerated manner, becoming nothing more than a mass of fluid and bones. Upstairs, Nora suffers from another attack that makes her spit up blood. Victor rushes to her side, and gives her the last pill out of the formoterol bottle, the drug that could prevent the attack. Desperate, Victor goes to Park Surgical to re-fill the medicine bottle but the pharmacist repeatedly refuses to help, insisting he needs a doctor to fill out a prescription before he will refill the medicine. Eventually, Victor loses his calm, throwing the formoterol bottle at the pharmacist and leaving, promising to return in a fit of rage.

At Arkham, Oswald waits outside Professor Hugo Strange's office as he finishes his appointment with Nigel.

Meanwhile, Victor returns to Park Surgical wearing his antifreeze suit and armed with his freeze gun. After freezing the guard and ordering Peter to supply him with formoterol, he freezes the pharmacist intending to use him as a test subject.

At the same time, Gordon and Bullock are alerted to the attack on the pharmacy. They soon arrive, but after a brief chase, Victor gets rid of them by making them collide with the frozen body of the security guard.

At Arkham, Strange analyzes the Penguin, trying to understand his recent actions and emotions. Strange ends the meeting by telling him that he is confident that they will be able to facilitate his rehabilitation.

When Victor returns home to take the frozen body of the pharmacist to his lab, Nora hears noises and goes to the laboratory, looking for her husband. However, instead of finding her husband, she instead finds the bodies of the people Victor had frozen.

Meanwhile, at Park Surgical, witnesses help Bullock find the bottle Victor had thrown at the pharmacist earlier - with Nora's name on it. Gordon, Bullock, and several patrol cars quickly go to the Fries home. After descending into Victor's laboratory, they find incriminating evidence, along with Nora, who is still stunned by her discovery. The detectives take Nora back to the GCPD for questioning, not realising Victor was watching nearby.

Meanwhile, at Arkham, Penguin is on the way to his cell when he hears Nigel talking away maniacally in his cell. Slowing to see what's going on, he sees that Nigel has removed his own eyes, after being given the advice by Professor Strange of "see no evil, do no evil". Cobblepot is horrified as he re-enters his cell.

In the interrogation room of the GCPD, Nora refuses to betray her husband, thinking that while he committed horrible acts, he had done so just to save her.

Nygma is in the morgue, with the body of Alex, the pharmacist, on the table. He leaves to get a drink, but returns to find the table is empty - Alex has gone.

Victor goes to the GCPD to surrender for his crimes, but is surprised to find the officer he speaks to doesn't seem to take his claims seriously. Instead, he is lead to a waiting area with four other people, all of whom have claimed to have committed the crimes. The sudden reappearance of Alex, still with the tag around his ankle, causes a disturbance, and Victor realises that this formula - A16 - has worked. Alex recognises Victor, and begins trying to scream at him, but is subdued by police officers. Victor quietly takes his leave unnoticed, finally realising he can save Nora.

At Arkham, Professor Strange goes a concealed elevator, leading him to the Indian Hill facility. In the elevator, he pulls out a tape recorder to record his notes on Penguin, explaining that the only way to cure him is through immersive aversion therapy and radical psychotropics. Arriving at the facility, he is greeted by Ethel Peabody, who tells him that Bridgit Pike isn't cooperating with their experiments, and that she has had to reschedule his meeting with Councilman Carter, once again. She then tells him that Victor Fries has solved the problem of post-cryonic reanimation, and hands Strange the latest​ edition of the Gotham Gazette which has dubbed Fries "Mr. Freeze". 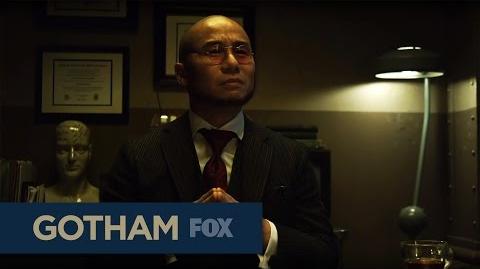 GOTHAM Tribulations from "Wrath of the Villains Mr. Freeze"
Add a photo to this gallery

Retrieved from "https://gotham.fandom.com/wiki/Wrath_of_the_Villains:_Mr._Freeze?oldid=72832"
Community content is available under CC-BY-SA unless otherwise noted.