"What The Little Bird Told Him"

"It seems as though a little bird has been making a bit of mischief."
—Fish Mooney to Don Falcone

"What The Little Bird Told Him" is the twelfth episode of the first season of Gotham. It aired on January 19, 2015.

In an attempt to get his job back, Gordon seeks to capture Jack Gruber, a deranged electrical genius who escaped Arkham Asylum. Meanwhile, Falcone struggles to hold onto his empire after Fish Mooney makes her next move.[1]

After their escape from Arkham, Jack Gruber and Aaron Danzig arrive at Irwin's Wholesale Electronics building to pick up Jack's gadgets and experiment from Irwin. Captian Sarah Essen addresses the police force about the escape from Arkam when Commissioner Gillian Loeb arrives. Jim Gordon makes a deal with Commissioner Loeb that gives him 24 hours to go after Gruber. If he succeeds, he will be reinstated into the police force. Carmine Falcone has one of his operatives killed as Liza tells him that he "makes her safe." Edward Nygma tells Gordon and Bullock that Jack Gruber is an alias of Jack Buchinsky, a former bank robber for the mafia who was betrayed by Sal Maroni, his former boss. Liza is brought to Fish Mooney under cover of an abduction as part of a move on Carmine Falcone.

Jack Buchinsky is later dubbed in the papers as the "Electrocutioner". Gordon is visited by Arkam nurse Leslie Thompkins. She tells Gordon that Arkham Asylum is getting over the incidents and tells him about an inmate who curses effigies (dolls) of people for inmates. At Sal Maroni's restaurant, Oswald persuades Sal Maroni to let him leave so that he can visit Falcone only for the restaurant to be attacked by the Electrocutioner. Later, Gordon and Harvey Bullock speak to Maroni about Buchinsky and want to use him as bait for the Electrocutioner. Barbara Kean visits her parents to see if she can stay with them for a few days. Just as Maroni and Gordon arrive at the police station, Cobblepot gains consciousness, muttering about his business with Falcone. During a phone call with Mooney, Falcone wonders whether Mooney is behind Liza's abduction. Falcone discusses with Mooney him leaving for Sicily with Liza in exchange for giving up leadership of the family.

Falcone tells Victor Zsasz that there must be others working with Mooney and for Zsasz to keep him and Liza safe during the upcoming transaction. Electrocutioner begins his attack on Gotham City Police Station. As Danzig starts to grab Maroni, Gordon appears wearing rubber shoes and fights them. Gordon uses a beverage to short out Electrocutioner's gear. Electrocutioner and Danzig are then arrested. Gordon is then reinstated into the police force by Commissioner Loeb.

Meanwhile, Falcone tells Cobblepot that he was right about Mooney as Cobblepot states that Liza was being used by Mooney. Falcone wants proof of that as Mooney calls wanting to meet with him at her nightclub. When meeting with Mooney, Falcone requests that Liza be seen as part of the deal, where he mentions "a little birdie" telling him about their partnership. Zsasz and several mercenaries enter the building after killing a number of Mooney's gangsters waiting outside. Falcone strangles Liza to death in front of Mooney, scolding Fish for using a girl with the likeness of his mother to destroy him. Falcone calls for Oswald, who relishes having the upper hand against Fish. Before Falcone has Mooney and Butch Gilzean led away to their undetermined fates, Cobblepot takes the opportunity to mockingly say goodbye to Fish. Afterward, Cobblepot keeps control of Mooney's nightclub and what remains of her gang.

Nurse Thompkins visits GCPD to ask Gordon for Arkham Asylum's "sorceress's" doll back. At this time, a police officer informs Gordon about the shootout at Mooney's nightclub. 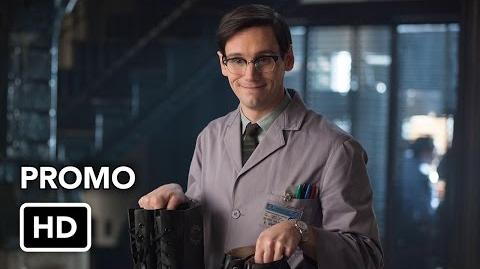 Retrieved from "https://gotham.fandom.com/wiki/What_The_Little_Bird_Told_Him?oldid=65070"
Community content is available under CC-BY-SA unless otherwise noted.