"The Scarecrow" is the fifteenth episode of the first season of Gotham. It aired on February 9, 2015.

Gordon and Bullock set out to stop Gerald Crane, a biology teacher who has been harvesting the adrenal glands of his murder victims. Meanwhile, after finding herself in an unusual setting, Mooney continues plotting to gain power, and Falcone attempts to change Maroni’s plan for the Penguin. Then, Bruce takes a treacherous hike.[1]

During a storm, Gerald Crane and his son, Jonathan, terrifiy another victim after he arrives at his apartment. Elsewhere, Fish Mooney wakes up in an unfamiliar place, surrounded by men fighting. She is soon approached by two men, who she gets to leave after threatening both of their lives. In the city, Jim and Leslie concluded their third date, at the end of which Leslie informs him that she was hired as the new medical examiner of the GCPD, much to Gordon's surprise. The next day, while the police search the home of the most recent victim of Crane, Bullock gives Gordon the rundown once he arrives. Elsewhere, Crane uses the adrenal glands to make a serum that he injects himself. After doing so, he has hallucinations of his wife haunting him in the midst of a blazing fire. Meanwhile at Wayne Manor, Bruce prepares to leave to honor a yearly tradition he and his father had of hiking, camping and watching the sunrise.

At Mooney's nightclub, Penguin tries to convince Don Falcone of Maroni's threat to his life, but Falcone apparently ignores him, continuously talking about the redecoration of Fish Mooney's club, to Oswald's frustration. He explains that the club means money and money means influence and influence is the only thing that can protect Penguin. Falcone then tells him that he has decided to give him the club as a reward and that he would deal with Maroni. At the GCPD, Leslie arrives for her first day of work. Using a yearbook from the school where Gennaro Marx worked, Bullock discovers Crane's identity. Meanwhile Fish discovers that the boss of the underground prison where she's held is run by a prisoner named Mace. Bruce begins his journey hiking in the forest. The detectives visit Aquinas High School, intending on finding more information about Crane. The headmaster, Judith Barthel informs them that Crane left without notice one day. She also tells that he was very protective of his son Jonathan and that his wife died several years ago in a car accident. She gives them an academic paper that Crane had written, where he explained his theory that fear was an evolutionary failure in humans and was trying to cure himself of it. Back at the GCPD, Bullock and Gordon discover that Crane had intentions on creating inoculations for himself and another person, dubbed "Subject B". At the Crane house, Gerald once again injects himself with the inoculation serum and suffered from the hallucination of his wife in a burning fire. Afterward, he informs Jonathan that it was almost his turn to be cured of fear, as it is working.

Penguin rushes to finish his remodeling of the nightclub. Elsewhere, Fish questions Mace as to why he was the leader of the underground prison, as there are a lot of tough guys around. He explains that there's only one blade in there and he has it. Later Penguin arrives at the GCPD to bring Detective Gordon an invitation to the grand re-opening of the nightclub, but he has an awkward encounter with Edward Nygma who attempts to give him a riddle to answer though he is dismissed. When Jim arrives, he turns down Oswald's offer to attend the nightclub and though Penguin offers to help him with his case, Gordon rejects the offer and tells him he doesn't want him coming to the GCPD again. Offended, Penguin tells Jim that he shouldn't treat him that way, and that he'd one day soon he'd need his help. At the Crane house, Gerald injects Jonathan with the serum. During his journey, Bruce comes across a pile of rocks with his and his father's initials on them, from years previous. In a fit of rage, he knocks the pile over and begins throwing them everywhere. He then sinks to his knees crying, and soon afterward, he falls down a steep slope, badly spraining his ankle. At the GCPD, Jim draws a line with Lee regarding public displays of affection during the job, though the two are interrupted by Bullock.

At Falcone Manor, Maroni visits Falcone to address the issue of Penguin. Despite wanting revenge against him, he decides to leave him alive after Falcone shows him a captive Judge Stanley Turnball. Falcone drugged and abducted him when he was found to be having a sexual relationship with a younger man. Having the Judge whipped while his torturer took pictures, much to Maroni's amusement. At the GCPD, Gordon and Bullock discover that Crane's real fear he had been generated by the guilt of not being able to save his wife from a fire that had occurred in their house, years ago. With that information, they decide to visit the old Crane house. At the Crane house, Jonathan tries to escape from his father, as to not have to continue to be subjected to the injections but only manages to get so far, by an old scarecrow. In the end, Gerald manages to convince him to return since their work was for the good of humanity.

Looking out into the darkness, Alfred decides to go look for Bruce. Meanwhile, Bruce continues to try climbing the slope with his sprained ankle. In the underground prison, Fish uses her wits to bypass the security of Mace and finally get close enough to take his knife from him, assassinating him and taking his place as the head of the prison. Gordon and Bullock arrive at the old Crane house, where, Gerald and Jonathan attempted to escape through the yard. Stopping at the hay under the Scarecrow, Gerald decides to conclude the injections and administered an extra-large dose to Jonathan that leaves him convulsing wildly and screaming. Fearing nothing, Gerald takes his gun and shoots at the Detective, though they quickly shoot him down. Finding Jonathan, Gordon quickly tells Bullock to call an ambulance. Meanwhile, after a long crawl to reach the top of the hill, Bruce finds Alfred located next to a campfire with food and drink. Alfred then helps Bruce up, and Alfred suggests that they wait and watch the sunrise like Bruce did with his father. Bruce agrees, though only if Alfred can handle it. Afterward, tea is offered by Alfred.

At his nightclub, Penguin is visited by Don Maroni, much to his surprise, there the Don makes his intentions clear to not hurt Penguin, due to a deal he made with Falcone. He warns him that the second Falcone is out of the picture and Penguin will die. At the end of the night, Alfred and Bruce watch the sunrise together. At the GCPD, Leslie invites Jim to the circus, and he once again reminds Leslie of no PDA in front of their peers, and surprisingly she accepts his terms. At the underground prison Fish announces to her fellow prisoners that there'd be order from then on, though soon after their captors entered bringing in a woman whose eyes had been removed, to everyone's horror. Back in Gotham City, Jim visits the hospital to check on the state of Jonathan Crane. There, Doctor Anderson informs him that the injections have altered Crane's brain activity, leaving him in a constant state of terror. In the room, Jonathan begins to experience continuous horrific hallucinations of a giant scarecrow coming towards him, causing Jonathan to scream in terror. 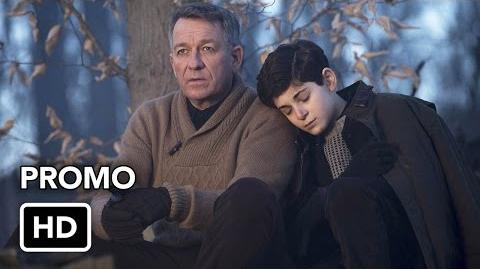