"Really? I've always found that the best and bravest people are the ones that willingly acknowledge their fears."
—Scottie Mullen to Detective Bullock

"The Fearsome Dr. Crane" is the fourteenth episode of the first season of Gotham. It aired on February 2, 2015.

Fish Mooney reveals a secret of Oswald Cobblepot's, prompting Maroni to take him on a trip to test his loyalty. Meanwhile, Gordon and Bullock hunt down a killer who targets victims with severe phobias and Bruce Wayne confronts Gordon for failing to make progress on his parents' murder case.[1]

On the roof of a building a man wearing glasses, a trench coat, and black hat puts a rope around the neck of Adam Jodowsky, tied and gagged to a chair, and hangs him from the building. Elsewhere, Don Maroni and the Penguin celebrate after the latter tells Maroni about the defeat of Fish Mooney at the hands of Falcone. Maroni then receives a surprise call from Fish informing him that the Penguin was actually Falcone's man, and had played them both in an end run. That information, coupled with Maroni's own doubts, caused Maroni to take Cobblepot with him a on trip with him to the country. When the GCPD finds the body of the hanging man Bullock is present and is given advice by Captain Essen, to watch himself, as Detective Flass had many friends on the force. At Barbara Kean's penthouse, Gordon arrives, and finds that Selina Kyle had been staying there in his ex-fiancee's absence. Soon after, he is told by Selina that she didn't actually see the Waynes' killer, and had lied.

After hearing this, Gordon visits Bruce at Wayne Manor to confirm what he had been told, but Bruce decides to relinquish Detective Gordon from his promise, as after several months had passed, Gordon hadn't found any leads, aside from Selina, who turned out to be a liar. Maroni takes Penguin to a cabin in the country, and during breakfast he shares his suspicions about the death of Frankie Carbone, and how Falcone snatched up Indian Hill which he had traded for Penguin's life, despite it being worthless. At the GCPD, Bullock talks to Scottie Mullen, Adam Jodowsky's sponsor, and a member of the phobia group had been apart of. Believing that the murderer could be one of the group members, Harvey prepared to attend the next session. Meanwhile the mysterious man abducts another person on the street whilst using his phobia against him, which was a pig. At the GCPD, Nygma is suspended indefinitely after being caught again performing an autopsy without the authorization of the actual medical examiner. Going to the furniture factory that made the chair used to hang Jodowsky, Gordon and Bullock to the surprise of both, find a guy, wearing a pig mask, torturing the kidnapped man. Elsewhere at sea, Fish Mooney is attended to by the ship's' captain.

After shooting the masked man, Bullock decides to visit Scott's phobia group to give the good news, while Gordon insists on further research to make sure the man they shot wasn't working alone, because of the post-mortem incision made in Jodowsky's body before being killed. Meanwhile, Nygma says goodbye to Miss Kringle, and at the cabin the Penguin steals Maroni's gun before sitting across from him to play a little game of confessions. When Maroni finally exposes his distrust of Penguin after being called by Fish Mooney, Penguin, takes the gun out to shoot him. On Cobblepot's unfortune, the gun was full of blanks, and Maroni then proceeded to knock him unconscious. Without being able to call upon Nygma's expertise, Jim uses the case as an excuse to see the Leslie Thompkins. He later confessed this to her after she arrived dressed up and the two kissed before Gordon had to leave. That night Bullock attends the phobia group, confessing his biggest fear to the rest of the attendees of being killed in the streets while a criminal goes through his pockets. Bullock instead wanted to die in a warm, cozy bed, in the arms of a beautiful woman.

Meanwhile, Maroni goes to see Penguin crushed in a car compactor at Duffy's Salvage and dismisses Penguin's begging, citing that listening to Penguin is what got him in that predicament in the first place. At the GCPD, Nygma sneaks into the locker room to gain access the medical examiner's locker. After Bullock speaks, another attendee, Tod exposing his greatest fear, failure, having thought that he had passed it to his son as well, a fear he himself had inherited from his own father. At Duffy's Salvage in the car that was being compacted, with his life on the line, Penguin telephones Maroni to beg for his life and tells him whoever controls Indian Hill and Arkham controlled Gotham. Maroni once again ignores Penguin's pleas, and Cobblepot is forced to call the Duffy, the operator of the crusher and warns him that Falcone knew of his current predicament, and that if he didn't stop the compactor Falcone would be sending a team to skin him alive, and slaughter his family. Effectively frightened, Duffy stops the machine and escapes before the astonished gaze of Maroni, while the Penguin uses the opportunity to flee the salvage yard.

After Scottie hadn't returned for several minutes, Bullock arrives as "Tod" drives with her held hostage in the back of his van. Returning to the GCPD, Guerra, the medical examiner, found his locker filled with several cut up human appendages. Knowing that the greatest fear of Scottie was drowning in a pool, Harvey manages to discover when she was seven, she almost drowned in a pool at Lemmars Park, prompting him and Gordon to go there. At Lemmars Park, Tod, accompanied by his son Jonathan, pushes Scottie into the pool to have her die by her greatest fear, but unfortunately his plans are ruined by the unexpected arrival of the Detectives. Harvey throws himself into the pool to save the woman, and Jim chases Tod into the boiler room, simultaneously shooting at him. Crane gets away after closing a door, cutting Jim off, while Bullock successfully saves Scottie's life.

The next morning Penguin is found sleeping under several leaves, by several religious ladies heading toward Gotham. They, pitying him, decide to give him a ride back to the city. The same day Dr. Thompkins arrives at the GCPD to inform Gordon that the murderer extracted the adrenal gland, commonly known as the fear gland to extract all its hydro cortisone. Jim then tells her that there will possibly be more work for her, as their medical examiner had been fired for stealing body parts. Excited by the offer, to which leads to dinner between the two, she decides to kiss Gordon passionately uncaring that they'd be seen by the rest of the police department. Elsewhere, the boat Fish Mooney was on was overtaken by pirates, with Mooney engaging one of them in battle when he arrived in her room. 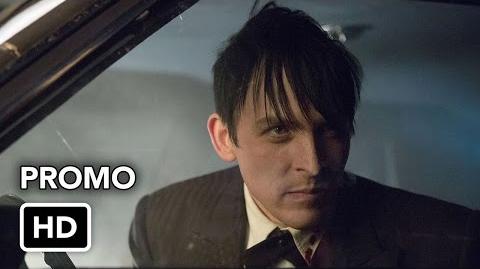