"These are electrode wounds. This man was given a crude, invasive kind of electroshock therapy. Metal needles were inserted into the brain and electricity was applied to his frontal lobes."
—Dr. Thompkins to Officer Gordon

"Rogues' Gallery" is the eleventh episode of the first season of Gotham. It aired on January 5, 2015.

Det. Gordon’s assignment at Arkham Asylum gets off to a rocky start when the murder of a guard ignites an investigation, leading him to meet Dr. Leslie Thompkins. Meanwhile, Cobblepot continues to build his army.[1]

Several weeks pass and Jim Gordon begins his job as a security guard for Arkham Asylum. One night, in the middle of a coordinated play by a nurse, Dorothy Duncan, Frogman Jones loses his sanity and attacks Royston, another one of the actors. He hits him several times before Gordon and his cohort manages to stop it. As another altercation that he should have been able to prevent, Jim is reprimanded by Director Gerry Lang, who blames him for letting the situation happen in the first place. Moments later, Dr. Leslie Thompkins comes to the infirmary to inspect Royston and meets Jim. On the streets of Gotham, Selina finds a sick Ivy sleeping in a box in the rain, so she decides to take her to Barbara Kean's penthouse, assuming it will be empty. The next day, the Penguin comes to the port in an attempt to raise fishermen's taxes without the authorization of Don Maroni. A GCPD officer arrives, having been called by the fishermen, and knocks Penguin out, arresting him and Gabe.

Back at Arkham, amidst one of his rounds, Gordon discovers a patient in a vegetative-like state, complete with two holes on the side of his head. Dr. Thompkins helps him discover that someone has administered electroshock therapy on the patient, completely frying his brain. After being informed of the situation, Director Lang prohibits Gordon from alerting the police, instead of giving him the task of finding out who committed such an act. Knowing a guard's keys would have been needed to access the cell, Gordon investigates his fellow officers, namely Steven Wenger, to discover who lost their keys. Wenger confesses that he lost his during the riot the previous night.

At Mooney's nightclub, Fish Mooney meets with Jimmy Saviano and Janacek, two other underlings of Don Falcone, to find out how they felt after Falcone had raised their tariffs. Saviano states that he wished something would happen to Falcone before any of them ended up like Bannion, asserting that, as next in line, he'd take over if Falcone fell, to Fish's dismay.

Along with Nurse Duncan, Gordon interrogates several patients in the asylum, including Jack Gruber, a sociopath imprisoned for murder and rape, and Aaron Danzig, an inmate who had murdered his entire family with an ax who was unable to lie.

At her nightclub, Fish begins to make plans to deal with Saviano knowing that he would present an obstacle. However, Butch offers to handle the situation as he and Saviano had known each other since childhood, and as such had a history together.

At Arkham, Royston is abducted and subjected to electroshock therapy, as Frogman had been. Gordonuspecting a staff member, though Lang suspects Gordon is trying to force the involvement of the GCPD. Unfortunately for Lang, Gordon has already called them.

Renee tells Barbara that they're a toxic combination, and Barbara needs to go back to Jim. Barbara disagrees, and angirly gathers her things, though Renee offers to go.

Alerted by Gordon's call, Bullock visits the Asylum, happy to see his former partner. He takes Lang to the GCPD for questioning, considering Lang's reluctance to call the police and his skills in performing electroshock therapy.

At the port, Butch meets with Saviano, who ends up asking him to drop Fish and come work for him, offering him anything he wanted if he did so.

Bullock is surprised to find the Penguin locked in a cell at the GCPD, and refuses to release him, instead preferring to have him right where he could see him. Bullock interrogates Lang, asking him who on his staff could possibly do such a thing. Lang defends his staff members, telling Bullock that they have all been with him for the past 5 years and they came to Arkham together, except one person.

Analyzing the blueprints of Arkham, Gordon discovers that the person who had been attacking the inmates should be based in the basement area, so Nurse Duncan offers to escort him there. On the way to the basement, Jim begins to notice her strange behavior, and the situation worsens when the two cross paths with Dr. Thompkins, who offered to accompany them. Suddenly, Duncan pushes Leslie towards Gordon and begins to flee in terror. Soon after, Harvey calls Gordon to inform him that Dorothy Duncan is actually a patient, not a nurse. In her desperate attempt to flee, Duncan opens all the cells in the asylum and starts a riot, but unfortunately is killed when she falls and is trampled on by the other inmates. Jim and Leslie manage to gate the inmates off and save themselves.

That night, Barbara calls her penthouse to talk to Jim, but Ivy answers the phone and lies, telling her she's a 'friend' of Jim's, and that Jim is busy. Barbara hangs up, upset.

At the GCPD, Gordon and Bullock report what happened to Captain Essen, and how Duncan had stayed in the basement of Arkham when it originally closed, disguising herself as a nurse when it was re-opened. With another case finally solved, the trio shares a drink for old time's sake but are interrupted when the Medical Examiner comes in to tell Essen that he had found electroshock therapy marks on Duncan's head as well. This proves she was not the culprit, and that whoever it was is still at large.

Outside the room, Maroni arrives at the GCPD, revealing he had Penguin locked up in order to teach him a lesson in humility after he'd tried to raise the fishermen's taxes without asking him first. At that very moment, Aaron releases himself from his cell with the stolen keys and kills Officer Wenger on the orders of Jack Gruber, who had been behind the attacks from the start.

Arriving at the Asylum, Gordon finds a note from Gruber in the hand of a dying Director Lang, in which he expressed his wishes for the two to meet again.

The next day Jim returns to Barbara's penthouse and finds evidence that someone had been staying there.

At the port, Butch once more meets with Saviano to tell him his answer. Butch agrees to join up with Saviano, and after telling his old friend how he had cheated him out of Angus steaks when they had robbed a deli as kids, Butch kills him. 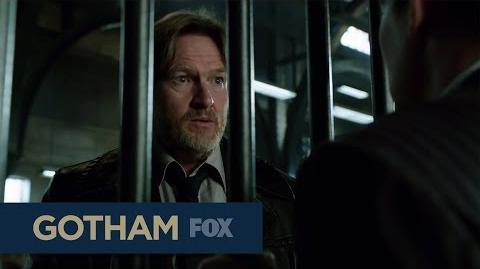 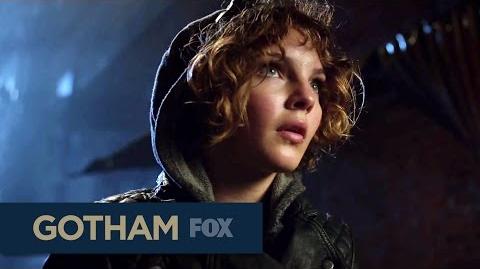 The Cat in the Alley from "Rogue's Gallery" GOTHAM 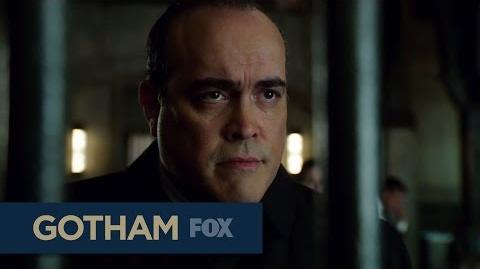 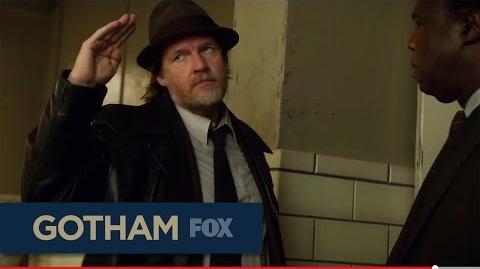 Will Do, Detective from "Rogues' Gallery" GOTHAM
Add a photo to this gallery

Retrieved from "https://gotham.fandom.com/wiki/Rogues%27_Gallery?oldid=71987"
Community content is available under CC-BY-SA unless otherwise noted.