"Rise of the Villains: Worse Than A Crime"

"For centuries our noble clan lived in vile, squalid obscurity. But we lived in hope. Because our patron saint spoke of a glorious day to come. But that day would only come when nine men of Gotham and the last son of our mortal enemy are slain by righteous hands. That's you, Bruce. You're the last son."
—Theo Galavan to Bruce Wayne

"Rise of the Villains: Worse Than A Crime" is the eleventh episode of the second season of Gotham. It aired on November 30, 2015. During a commercial break, a special sneak peek of Batman v Superman: Dawn of Justice was shown.

When Bruce Wayne is kidnapped, Gordon must look to some unlikely and dangerous allies for help. It is a battle of the villains and not everyone makes it out alive.[3]

At the garbage dump site, Alfred tries to escape despite his wounds. But Tabitha Galavan arrives in pursuit of him, with a group of armed underlings. At Wayne Manor, Lucius Fox exits Thomas Wayne's lair after finally repairing the hard drive to the computer, but in the study finds evidence of an abduction. Elsewhere, Bruce is brought to the Galavan's penthouse with a hood over his head, and his hands tied. When the hood was removed, Bruce discovers Theo Galavan before him, and tells him that he won't sign his company over no matter what Theo did. Resigned to that fact, Theo reveals his true name and tells Bruce about the events that had transpired between their two families. He then told Bruce of the prophecy that his family's patron saint promised, of the day when the blood of nine men of Gotham City and the Son of Gotham were slain by righteous hand to wash away the sins of the city. Father Creel then appeared to begin the preparations for the sacrifice so that at midnight, the Dumas family could finally be avenged. Meanwhile, at the garbage dump, Alfred hid from Tabitha inside a refrigerator, but his attempt at escape is set back several bags of garbage is dumped from above, causing him to shield himself inside the refrigerator.

Jim Gordon dreams of his last encounter with Barbara Kean and wakes up is the home of Edward Nygma where he finds Nygma playing the piano and singing next to the Penguin. Disoriented, Gordon tries to leave but stops when Oswald warns him that the police were looking for him and he was considered a fugitive from the law. Based on that, the Penguin offers the opportunity for them to work together again to once and for all stop Theo Galavan. At the Galavan penthouse, Theo expresses his disappointment towards Tabitha for her lack of maturity and failure to capture Alfred Pennyworth. However, the argument between them is interrupted when Silver St. Cloud arrives in the room, attempting to feign illness to avoid having to attend the sacrifice of Bruce Wayne that night. Seeing that she had compassion for Bruce, he entrusts Silver with a test: make Bruce fall in love with her all over again and kiss her before he died, to prove that she was worth of the Dumas name. Theo then flirts with the idea of kicking her out of the family, despite the objections of his sister.

Later, Silver visits Bruce in his cell to apologize for what had happened before and for lying. Bruce silently listened to her words, and in the end reluctantly allows her to stay there with him. At the garbage dump, Alfred finally manages to escape and tries to steal a car to return to the city, however, a couple of cops stop, and immediately shoot him in the face with a stun gun. At the GCPD, Leslie Thompkins rebukes Captain Barnes for putting out an arrest warrant on Jim. However, Barnes points out that he couldn't ignore Gordon's attack on Galavan, the death of two policemen and Gordon's subsequent escape along with Penguin. Barnes then questions Leslie to find out if she was aware that Gordon had been working with Penguin or if she knew his whereabouts, but in the end, he gets nothing from the doctor. After he leaves, Nygma approaches Leslie to inform her of the address where she could see Gordon. While Bruce and Silver have a conversation his cell, Leslie arrives at Nygma's apartment to reunite with Jim. There, seeing Penguin and his men prepare for their assault on Galavan, she asks Jim to leave the city with her because she was pregnant.

Meanwhile in Bruce's cell, Silver and Bruce share the happiest memories of their childhoods, and due to their conversation, Silver decides she is unable to watch Bruce die. Silver uses her status as a Dumas to outwit the monk and help him escape. Unfortunately, Theo and several monks recapture them easily and then lock them up in a cell. At the GCPD, Lucius goes to Barnes and Bullock to convince them that Bruce and Alfred had obviously been kidnapped by Galavan. Unfortunately, the captain is unable to help him due to the lack of evidence. However, out of respect for Wayne Enterprises, Barnes runs Bruce and Alfred's name through the system. Soon after they find Alfred in a GCPD cell, and Bullock wakes him up with a bucket of water to the face. After Alfred explained his situation, Barnes again refused to act as he explained that Alfred had been rightfully pursued off of Galavan's property by the rightful owners. Unable to do anything else to convince the captain, Alfred asks Bullock for his help and while Lucis chooses to stay out of it given his lack of skills in the area, Alfred asks for Jim Gordon, though Bullock tells him he was nowhere to be found. After mentioning Gordon, they noticed Nygma nearby who had been spying. They then questioned him as to the whereabouts of Gordon, until he revealed the truth through a riddle that Lucius solved with ease.

That night, given Leslie's news, Jim chooses to leave everything behind and to leave the city with his beloved, but seconds before their departure Bullock, Alfred, and Lucius appear to inform him that Galavan had Bruce. Knowing it was useless to try to convince him not to go, Leslie moved into the driver's seat and before leaving she asks her boyfriend to call her when the whole affair was over. In Bruce's cell, Silver tearfully confesses her love for Bruce but Bruce reveals that he didn't feel the same as he had realized that she was trying to manipulate him once more with her past actions of the day. Feeling sorry for Silver, Bruce asks her why she was doing so, to which she replied that her uncle would kill her if he did not kiss and confess his love for her before his execution. Though Silver claims she's an evil loser, Bruce tells her that she was young and under the control of evil people, and although she believed otherwise, there was hope.

At Nygma's apartment, all present company aside from Lucius Fox prepared for the assault on Galavan, while Jim and Penguin argued on their opposing positions on whether or not to kill Galavan. Lucius suggests for them to devise a backup plan if the direct assault failed, and given the lack of a plan to break into Galavan Tower. However, Selina Kyle appears in the window offering them a way in, despite the strong opposition of Alfred. In the end, everyone is satisfied with the plan except Lucius, however, Gordon and Penguin agree that failure isn't an option. Near midnight, Bruce admits to Silver of not being scared by his imminent death that night because he'd soon be reunited with his parents. At that moment, Theo appears outside the cell with the monks to escort him to the altar, however before leaving Bruce turns around to kiss Silver and confess his love for her. Thinking that Silver succeeded in once more fooling Bruce Wayne, Theo congratulates her.

As the assault group approaches Galavan Tower, Bruce is brought to the altar where several monks of the Order of St. Dumas recite the prophecy asking for the death of the Son of Gotham. Minutes later, Selina sneaks in through a vent in the parking lot and takes down an acolyte, and then provides the team with a secure entrance. As the ritual begins, the group walks up many floors of stairs, however, this tires Bullock out, causing him to fall behind to momentarily rest. In the ritual room, Father Creel approached Bruce brandishing the ceremonial knife and began to complete the ceremony, but Silver raises her voice in protest, interrupting it. That brief moment of distraction allows Gordon and his companions to enter the room armed to rescue Bruce, while Theo takes Tabitha and Silver to escape. Father Creel angrily orders the monks to battle the group, beginning a violent shootout. At the GCPD, Lucius arrives to inform Barnes of Gordon's whereabouts.

After a few minutes, Gordon's group manages to defeat the monks, leaving Father Creel. Refusing to accept defeat, Creel lunges at the detective with the knife raised but Bullock finally comes into the room and kills him with his gun. Selina and Alfred then released Bruce, and Theo returns to his penthouse to escape with Tabitha, using parachutes. As there were only two, Galavan told Tabitha that Silver wasn't coming, and he took a moment to express his deep disappointment in her and tries to choke her with his hands, however, his sister knocks him unconscious​ with a blow to the head. When Theo regains consciousness, Tabitha reveals that it was time she started looking out for herself, then kicks Theo in the head. Tabitha then pushes Silver out of the window with her parachute on and jumps out following her to escape. Gordon immediately arrives to arrest Galavan for his crimes. After making Theo handcuff himself, he proceeds to escort him out, but after Theo confidently implies that he'll beat the case again, it makes Jim re-think the situation.

Jim puts a gun to Theo's head to end the root of the problem, but Captain Barnes appeared, ordering the Detective to put his gun down, and his hands on his head. Barnes manages to convince Jim to surrender to prove his innocence, but suddenly the Penguin and his men arrived, and knocked out Barnes and Officer Vargas intending to kill Theo. Gordon tries to stop them, but Oswald makes him understand that killing Galavan was for the greater good of Gotham. Elsewhere, Bruce, Alfred, and Selina left the premises, and Jim and Penguin took Galavan up to the Southside Docks where the latter savagely beats him with a baseball bat in retaliation for the death of his mother. Seeing Theo bloodied on the ground and begging for his death, Jim stops the Penguin and shoots Galavan. Gordon then begins to leave, while Penguin gets an umbrella out of the truck.

The next day Jim meets with Leslie in a park and after assuring her that the conflict was over, he asks her if she would marry him. Elsewhere, the body of Theo Galavan with an umbrella inserted in his mouth was taken to Indian Hill where Ethel Peabody examined him, she then told the orderlies to have some respect as Professor Strange had high expectations for Galavan. Elsewhere in the city, a terrified man flees into an alley, looking for a place to hide. To his misfortune, his attacker appears with a cryogenic gun and freezes him. 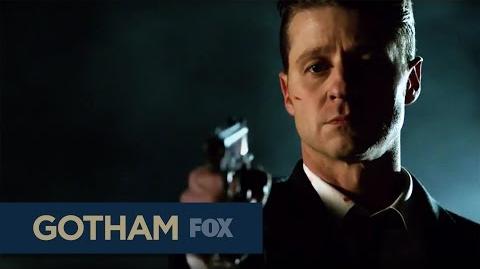 GOTHAM Preview "Rise of the Villains Worse Than A Crime" 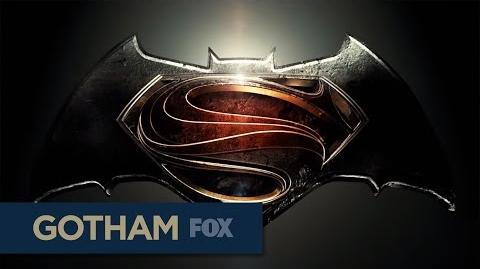 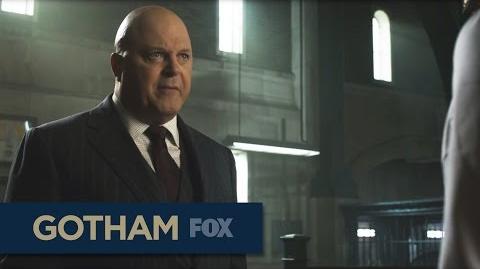 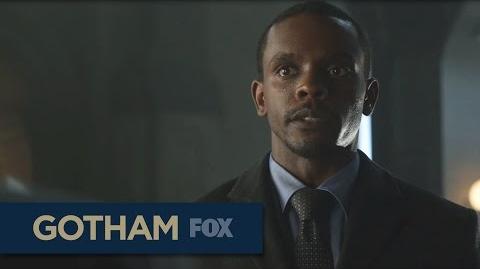 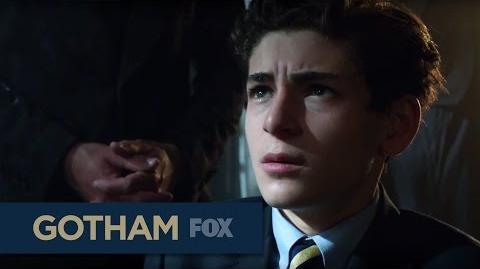 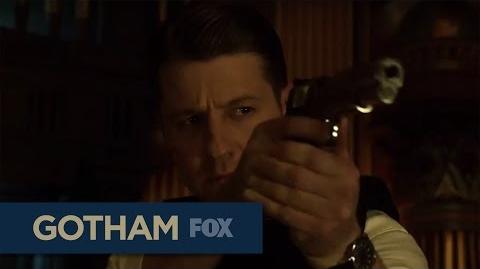 Retrieved from "https://gotham.fandom.com/wiki/Rise_of_the_Villains:_Worse_Than_A_Crime?oldid=76018"
Community content is available under CC-BY-SA unless otherwise noted.