"Rise of the Villains: The Son of Gotham"

"They're completing some sort of ritual to cleanse the city of sin. They have one victim left. They're calling him the Son of Gotham."
—Detective Gordon to Captain Barnes

"Rise of the Villains: The Son of Gotham" is the tenth episode of the second season of Gotham. It aired on November 23, 2015.

Gordon confronts a suspect who is connected to Galavan, but falls short of obtaining any information. Meanwhile, Bruce gets one step closer to discovering the name of his parents' killer.[3]

A criminal chases a woman in heavy rain, intending to steal her purse, but suddenly a monk appears who grabs the criminal and then disappears. Elsewhere, Detective Gordon attends the funeral of Officer Katherine Parks with his fellow officers, and afterward visits Theo Galavan at Blackgate Penitentiary to inform him he'll be attending Galavan's trial to see him found him guilty. Upon returning home to drink, Lee tries to convince him not to feel guilty for not having killed Flamingo when he had the chance, but the words have effect on Gordon. Meanwhile, the criminal captured by the monks is taken to a sanctuary of the Order of St. Dumas, where Father Creel cuts his throat in front of an altar to wash away the sins of the city of the blood of nine.

The next day, Bruce and Selina develop a plan to get the truth out of Silver, while waiting at the entrance of Anders Preparatory Academy. Before hiding in a tree, Selina gives Bruce a piece of advice - that the best liars always tell the truth.

At the GCPD, Gordon continues to investigate the disappearance of Gertrud Kapelput to prove that Galavan killed her, while Bullock investigates the robe and religious symbols found in the Galavan's penthouse. When Captain Barnes returns to work despite his injuries, the first thing he does is instruct Jim to investigate a body found at the harbor with the victim's throat slit, as the Galavan case was closed because it had already been solved. A few minutes later, Harvey is presented with the information that the symbols belonged to the ancient Order of St. Dumas which used to have an abbey in the center of the city, and that the Mayor's office casually tried to it a few weeks ago. Knowing that it presently serves as a Chinese massage parlor, Gordon chooses to ignore Barnes' order, and to follow his instinct.

Elsewhere, the abbey is attacked by Creel and the monks.

Outside the school, Bruce meets Silver to ask her to tell Theo he was willing to pay for the best defense attorneys, seeing as his funds had been frozen, if he agrees to give the name of the murderer of Bruce's parents. However, Silver is to do so because he believes that her uncle was guilty. Bruce says he'll believe whatever Galavan tells her, because it would come from her. Bruce then whispers something in her ear and kisses her, while Selina watches them closely from a tree. Minutes later, Bruce returns to school while The Knife and his companions watch him from a van, waiting for their moment to act.

Detectives Gordon and Bullock arrive at the massage parlor, finding several employees fleeing and covered with blood. When entering, they discover several bodies with sliced necks. One of the monks attacks but Jim manages to maim him with his own dagger. The monk does not flinch from the pain, and escapes outside. He informs Gordon that the day of judgment is near and that only the blood of nine will wash away the sins of Gotham. The man then throws himself into the street and is killed by a truck.

At the GCPD, Detective Gordon informs Captain Barnes of what happened at the massage parlor, and that the monks were penitents who believed in purification through pain and connects them with Galavan, as the Order of St. Dumas' crest was the one found in Galavan's penthouse. Gordon brings up that the dead man found at the ports had attacked a woman across town the previous day, and the woman had said he had been pulled off by a man dressed as a monk. Seeing the consistency between the two cases, Barnes gives Gordon permission to return to the investigation, ordering him to stop what the monks were planning.

At Anders Preparatory Academy, Bruce receives a call from Silver informing him that Theo had accepted his deal and had told her the name of his parents' killer. However, seconds later at their agreed meeting site, the Knife appears in his van revealing to have a bound and gagged Silver in his grasp. Against Silver's muffled screams the Knife orders Bruce to get in the vane, threatening to kill her.

At the GCPD, Detectives Gordon and Bullock are present when Leslie performs an autopsy of the monk's body. Gordon deduces that the monks' companions are operating in the sewers, and there, he and Bullock make their way to the area near the ports.

Elsewhere in the GCPD, Edward Nygma begins to suffer having Penguin as his roommate; however, his problems shift when Leslie asks about the whereabouts of Kristin Kringle. Nygma invents the story that she left him for Officer Dougherty, pretending to cry.

At an abandoned site, The Knife confesses to Bruce and Silver to have been hired by the board of Wayne Enterprises to find out what Theo knew about the Waynes' murder. After both deny knowing anything, The Knife takes Bruce to the back of the building to torture him, though while he does so, Bruce begs Silver to tell The Knife what she knows. In a moment of despair, Silver confesses to Bruce that her uncle never told her the name, and her mission was to keep him busy until Galavan was released, as he was confident that he'd get the company from Bruce.

Walking through the sewer, Jim and Harvey finally manage to find the altar of the Order of St. Dumas, but are attacked by another monk. However, Harvey manages to defeat him by throwing him against a stone column, which topples over his head.

In the abandoned building The Knife reappears minutes later, wiping his knife with a bloodied handkerchief as to proceed with Silver. However, Silver drops her act and orders that The Knife release her, because if he touched her, Theo would have him gutted and everyone he loved would die screaming. Happy by this revelation, The Knife attempts to cut off her thumb, but desperation leads Silver to tell him that the man who killed The Waynes was known as "M. Malone". Immediately, Bruce and Selina appear, to reveal that everything was staged to force her to tell the truth. After paying Tom, Bruce confronts Silver coldly to inform her that Selina previously raided her home, finding the file she had on him and that she had been sent to push him to sell his company. With Silver's true intentions exposed, Silver tells Bruce her uncle will kill her when he discovers what has transpired, but Bruce chooses to ignore her. Finally, Silver tells Bruce  she believes what he had told her earlier outside the school, and that he's not acting like himself, but Bruce tells her she's wrong.

In the sewers, while Bullock goes to call for an ambulance, Gordon deceives the wounded monk, posing as one of his brothers to get the truth behind the ritual murders they had been committing. By doing so, Gordon finds out that the Order is going to kill the "Son of Gotham" next.

At the Galavan penthouse, Tabitha returns to retrieve a ceremonial knife. However, Alfred Pennyworth appears, looking for Bruce, and Tabitha knocks his gun out of his hand using her whip. She gives him the opportunity to leave, but after the butler mocks her for doing everything her brother ordered her to do, he warns her that if he found out something happened to Bruce he would handle her. As he leaves, Tabitha does not hesitate to attack him with her whip. But to her surprise, Alfred turns out to be a worthy opponent. In the midst of the battle between the two, he is cut on his side, but despite that, manages to knock Tabitha unconscious, then flees to the elevator. Tabitha pursues him, jumping on top of the elevator, though Alfred manages to keep her at bay with the gun. Outside, Alfred jumps in a garbage truck to escape, but Tabitha throws a knife at him with hits him in the back.

Theo Galavan's trial begins with Harvey Dent calling former Mayor Aubrey James to recount his abduction. By the time Detective Gordon enters the room and begins a conversation with Captain Barnes, James admits to having lied about Theo Galavan abducting him. To the surprise of the judge, the jury and everyone in the court room, James admits that his abductor was actually Penguin. After the uproar in the room, Theo's lawyer seizes the opportunity to ask for his release in the absence of evidence, and in light of Aubrey James' testimony, the judge is obliged to do so. When the room grows silent, Theo admits to not holding grudges toward the GCPD as they were only doing their jobs. He then tries to reconcile with Gordon, but Jim is carried away by his own anger and hits Galavan in front of everyone. Several cops immediately grab Jim and drag him to the outside, but instead of arresting him, they attack him with electric batons until he passes out.

That night at Wayne Manor, Bruce and Selina return to the manor. Bruce takes the opportunity to thank Selina for her help, and guided by curiosity, Selina asks Bruce what he whispered to Silver in her earlier. He then confesses to telling Silver that he had never met a person like her, he trusted her with his life, and felt a connection that he could not explain, but wouldn't want to change. Bruce immediately recalls the advice she gave him about lying, and Selina asks him whether what he said to Silver was true. He tells her it was, just not about Silver. Visibly flustered, Selina asks Bruce to borrow one of his cars to return to the city. Before leaving, she congratulates Bruce on changing, but tells him not to change too much.

Meanwhile, Nygma calls Penguin, telling him to get rid of Kristin Kringle's glasses as Leslie had begun to grow suspicious. After ending the call, Oswald is visited by Gabe who informs him of the release of Theo Galavan.

Upon awakening, Jim finds his hands tied to a beam and Theo Galavan before him. Theo, in addition to telling Gordon the truth about his family and their links with the Order of St. Dumas, beckons for Gordon to be untied, giving him the opportunity​ to beat him. However, Jim fails to strike a single blow to Galavan, after the latter displays a series of martial arts which he promptly defeats the Detective with. He then leaves to allow Gordon to be killed at the hands of the police officers who abducted him, but Penguin appears kills the cops. Once they're dead, he begins to hit Gordon in an attempt to wake him up, so that he can tell him where Galavan is.

Theo breaks into Wayne Manor, confronting Bruce and telling him that he wants his life. 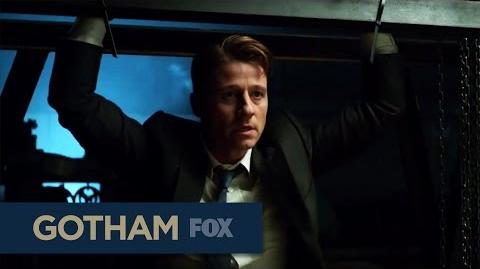 Retrieved from "https://gotham.fandom.com/wiki/Rise_of_the_Villains:_The_Son_of_Gotham?oldid=73070"
Community content is available under CC-BY-SA unless otherwise noted.