Rise of the Villains: The Last Laugh

"Rise of the Villains: The Last Laugh"

"You see, there's this guy, Dad. He believes in me. He thinks I'm gonna be a star. And, tonight, all of Gotham will see that, too."
—Jerome Valeska to Paul Cicero

"Rise of the Villains: The Last Laugh" is the third episode of the second season of Gotham. It aired on October 5, 2015.

Gordon and Bullock track down a nemesis from the past, leading to a standoff between Jerome and Gordon. Meanwhile, a magic show at the Gotham Children's Hospital gala turns into a hostage situation.[3]

With the GCPD still recovering from the massacre inflicted by the Maniax, Detectives Gordon and Bullock begin searching for Jerome by confronting people on the streets about his whereabouts, throwing them out of windows. Afterwards, the Detectives decide to check with Jerome's father, Paul Cicero to see if he knows where his son is. Before they can get to him, Jerome and Tabitha murdered him and placed documents to make it seem like it was him that orchestrated the Arkham Asylum breakout to free Jerome. Before his death Cicero tells to his psychotic son that he would be a curse upon Gotham, children will wake up screaming at the thought of him and his legacy will be death and madness. Gordon and Bullock arrive to an already dead Ciecro and Jerome manages to escape.

Elsewhere, Theo Galavan reveals the next stage of his plan as Barbara has a romantic encounter with Tabitha. Theo states that his family built Gotham and that he will get revenge on those who stole the credit for doing so. Alfred and Bruce attend the Gotham Children's Hospital Gala and run into Leslie. Alfred who has no idea Leslie is in a relationship with Jim, tries to flirt with her. During Alfred and Leslie's chat Bruce sees Selina who is "working" and tries to chat with her which ended up being awkward. As part of Theo's plan Jerome and Barbara disguise themselves as part of the magician act. During the show Leslie eventually recognizes Barbara and calls Jim, but is taken by one of Galavan's henchmen. When assistant deputy mayor Harrison Kane is called to the stage Jerome and Barbara officially reveal their true intentions by throwing a knife into a chest, killing. They then hold everyone present hostage, while Bruce and Selina manage to escape through a secret entrance.

When Jim finally arrives, Jerome talks to him on Leslie's cell phone telling him he has 10 minutes before he starts killing people and tells him that his "performance" was being broadcast on every TV in Gotham. Theo Galavan tries playing the hero to the public and demands that the two villains stop, only for Barbara to knock him out with a mallet. As Selina and Bruce are about to leave the gala, Bruce decides to go back to save Alfred, much to Selina's disapproval. As Jim is arguing with the fellow police officers he sees Selina coming out of the secret entrance giving Jim an opportunity to get into the Gala.

While Jerome is terrorizing the hostages, Barbara taunts Leslie that she predicts she and Jim be back together in a year and live happily ever after, and one day they will be telling their grandchildren about the evil, "man-eating harpy" who almost tore them apart. Lee whispers something, as if about to plead for her life, and Barbara leans in eagerly - before Lee knees her solidly in the stomach. In rage, Barbara grabs a knife and lunges at Lee, but Jerome stops her, saying it hasn't been 10 minutes yet. Jerome decides it's time to pick their first official victim and chooses Bruce and threatens to kill Alfred if he doesn't appear. Jim arrives, but Bruce is still determined to protect Alfred comes out from hiding. As Jerome drags Bruce and holds him at knife point Jim gives Alfred his second gun, but neither Alfred or Jim can find a clean shot that won't hurt Bruce leaving the three in a standoff until Theo who regains consciousnesses stabs Jerome in the neck, saving Bruce and boosting his popularity. Before anyone can react Barbara escapes through a trap door on the stage.

Bullock confronts Penguin while having a drink about the rumors about Jim collecting a debt for him, but Penguin denies it. Bullock tells the self proclaimed "King of Gotham" that he still sees him as just an umbrella boy and warns him not to come after Jim or he'll come after him and wants revenge for Fish's death. Oswald angrily breaks his cup, but quickly calms down and asks for another drink. Back at the Gala the madness has finally ended and Alfred thanks Galavan for saving Bruce. Alfred tries to flirt with Leslie once more only for Bruce to tell him she is with Jim, much to his disappointment. Back at their hideout Barbara kisses Theo on the cheek as Tabitha secretly watches. Although Jerome is dead some people are still amazed at the sadistic, but charismatic nature of the Maniax leader to the point where they commit homicidal acts of their own proving Cicero's prediction of his son leaving behind a legacy of death and madness true. In the medical examiner's room at the GCPD, Jerome's smiling corpse appears as Cicero's vision of his son is heard followed before brief maniacal laughing by Jerome echoes. 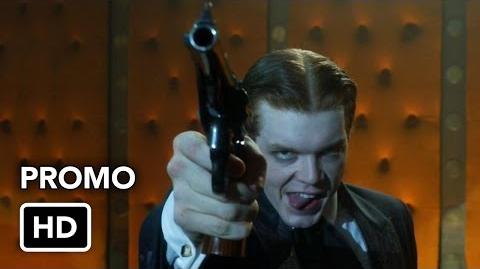 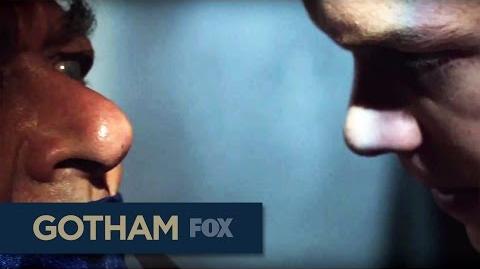 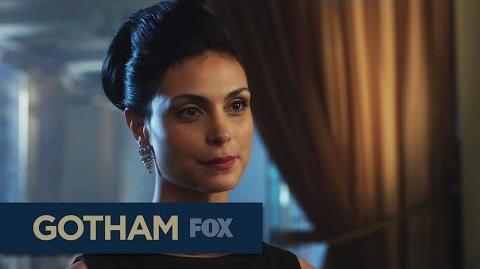 GOTHAM A Magician from "Rise of the Villains The Last Laugh" 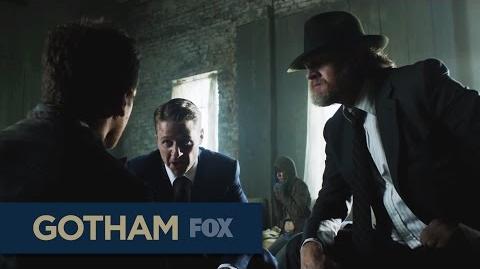 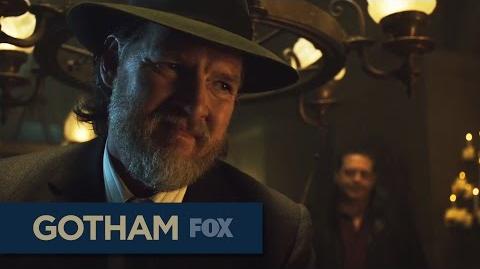 GOTHAM Rumors from "Rise of the Villains The Last Laugh"