"Rise of the Villains: Strike Force"

"What if there were a team of young cops who haven't been bought yet? Not jaded, not corrupted. Still filled with hope and faith in the system."
—Captain Barnes to Detective Gordon

"Rise of the Villains: Strike Force" is the fourth episode of the second season of Gotham. It aired on October 12, 2015.

Captain Barnes is called to duty to create a law-abiding task force, with the help of Gordon. Meanwhile, Penguin gets caught up in a favor for Galavan, and Nygma asks Kringle out on a date.[3]

An argument ensues as the Penguin uses a shotgun to get everyone's attention. He asks the room full of criminals how none of them know who orchestrated the Arkham Asylum breakout. Cobblepot blames Jerome for ruining how well business was going for all of them. He demands that if any of them plan to commit any serious crimes, they must first go through him. Tabitha stays behind from the meeting and tells Cobblepot her brother, Theodore Galavan, would like to meet him. Captain Nathaniel Barnes introduces himself to the Gotham City Police Department and lectures the officers and detectives on allowing their commissioner to be murdered. Barnes calls for the resignation of any officer who is not ashamed of the fact that they allowed it to happen and lines up officers he calls criminals and fires them. Barnes arrests one who attempts to argue his dismissal. Any officer who commits crime or ignores crime will be busted, according to Barnes.

Barnes calls Jim into his office and questions what he thought of his speech. He calls Jim a troublemaker and a fighter and appoints him his second in command. Jim tells Barnes they're shorthanded and it's going to be tough to correct the unit. Barnes tells him tough is what they eat for breakfast. Jim walks out and is greeted by Bullock, who disagrees with Barnes, but Jim has faith in the new captain. A newscast narrates the race for Mayor as Galavan looks on. Penguin walks in and greets him. Barbara eventually comes in and admits that her and Penguin had met before. He realizes that Galavan is responsible for the Arkham breakout, and eventually Tabitha tells Penguin he isn't the "King of Gotham", rather the "King of Garbage", though he tells them not to underestimate him. Galavan then unveils his new plan for Gotham's future and he wants Penguin to be his "Destroyer," and take out the residential areas. His mayoral candidacy will allow him to get the approvals needed and he wants Penguin to assassinate the other candidates, but he refuses. Tabitha shows Penguin, "her favorite reality show," which is Cobblepot's mother imprisoned. Galavan tells Penguin he must assassinate the candidates to get his mother back safely.

While sleeping, Barnes wakes up Leslie Thompkins by calling her phone. He tells her he's going to be sending her a lot of dead bad guys and asks to speak to Jim. Barnes tells Jim to meet up with him at 0700 at the Gotham Police Academy. There the next morning, Barnes informs Jim of his plan, as he wanted to grab the cadets at the Academy for the GCPD before they became corrupt or crushed. Barnes and Jim meet Gus Freeman, a trainer at the Academy, who shows them a girl with patience in the boxing ring who knocks out a man much larger than her. They continue to interview several other cadets and pick four who will answer only to James Gordon. Elsewhere, Theo Galavan receives the Medal of Valor and Bravery. Reporters question why he isn't running for mayor and a drive by shooter fires at the conference. He follows up by announcing he will run for mayor. Penguin enters Janice Caulfield's office. She asks if he is there to kill her and pleads with him but he stabs her several times before exiting. Butch releases the two people he had captive and threatens their families if they say anything. Alfred waits for Bruce and Selina climbs over the while, flipping down onto the ground. He smacks her across the face for killing Reggie and bans her from seeing Bruce. She leaves in tears and Bruce walks up. Alfred tells him about dinner with Theo Galavan coming up and Bruce is happy to attend. Alfred hands Bruce some shoes and gym clothes and tells him to run back to the Manor, seeing as he wanted to train.

Nygma practices dating lines with a skeleton. His alter ego laughs at him and tells him to take what he deserves after having saved Ms. Kringle's life. He promptly tells him about dinner at 8 o'clock tonight. Barnes rallies folks the Strike Force at GCPD and gives them their new uniforms and weapons. A man steps in and tells Barnes about Caufield's murder. Jim and Harvey go to the scene looking for information. A witness reluctantly gives Jim a description of the Penguin. Bruce meets Theo at a restaurant. Theo wants to talk about Bruce's parents' murderer. He claims to want to find the person responsible. Bruce sees a blonde girl outside and Theo tells Bruce her name is Silver St. Cloud and offers to introduce her to Bruce. Theo brings up the fact that they'll be sharing a school soon. Bruce and Silver seem excited to get to know each other. Nygma prepares some dinner. Ms. Kringle arrives and says she was expecting a restaurant but he insists he's a good cook. Butch questions Penguin and why they're killing candidates. Penguin tells him about his mother's kidnapping and Butch wants to find her. The other mayoral candidate, Randall Hobbs, arrogantly dismisses a request to go somewhere safer. Victor Zsasz enters and says he was there to volunteer. He opens fire on the candidates security and then chases the candidate out of the building. The Strike Force arrives outside and tries to stop Zsasz. A gunfight ensues and they bring the candidate to safety. Zsasz gets shot and shoots a fire hydrant on his way down, allowing him to escape unseen. Jim and Harvey wonder what Penguin is playing at.

At his apartment, Nygma and Kristen's was going well. Kristen reflects on how she ignored Nygma and accused him of writing Doherty's goodbye note. Nygma slips and tells her that he's glad Dougherty was dead. The mood is ruined and Kristin goes to use the restroom. Nygma's dual personality appears and he tells it to leave him alone, though Kristin thinks he was talking to her but Nygma explains that he has a voice in his head he talks to sometimes. She tells him she has a voice as well and it thinks they can get back to the good mood. They share a kiss, remove their glasses, and get it on. Jim accuses Penguin of killing Caufield. Penguin tells Jim it's complicated. He asks Jim to walk away and when he doesn't, Cobblepot tells Jim he knows why he came alone. Jim is cornered and can't arrest Penguin because of how he had Penguin get him his job back. Jim walks away and stops to say, "I'll face whatever's coming to me." Barnes tells the Strike Force they are on a mission to take down the Penguin. Bruce walks around his school and finds Silver St. Cloud outside. Selina sits on the side of the street. At his penthouse, Theo asks if he should wear red or blue. Barbara tells him she wants to have some fun and Galavan says he is going to steal the mayor's office. Penguin asks Butch if he found his mother and Butch consoles him. He then throws his drink in the fire and screams. 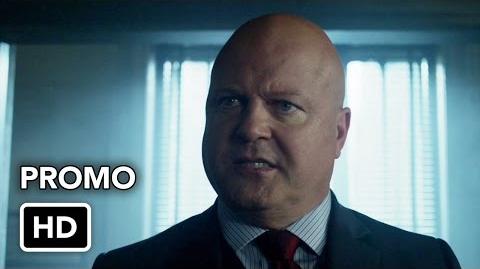 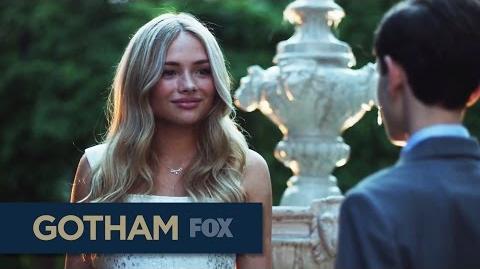 GOTHAM A Beautiful Introduction from "Rise of the Villains Strike Force" 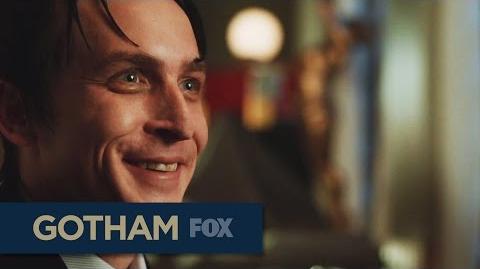 Retrieved from "https://gotham.fandom.com/wiki/Rise_of_the_Villains:_Strike_Force?oldid=60534"
Community content is available under CC-BY-SA unless otherwise noted.