Rise of the Villains: Scarification

"Rise of the Villains: Scarification"

"You don't like fire? Fire is our bread and butter. It's our family business."
—Joe Pike to Bridgit Pike

"Rise of the Villains: Scarification" is the fifth episode of the second season of Gotham. It aired on October 19, 2015.

Galavan and Penguin join forces with a dangerous family in Gotham. Then, as the rivalry between the Waynes and the Galavans resurfaces, Gordon struggles to maintain order in the city.[3]

The Penguin takes a chest he had been sent to retrieve to Theo Galavan, and while attempted to get freedom for his mother, Theo denied him the request, because he was useful as a tool. After Oswald leaves, Tabitha Galavan opens the chest which contained Sid Bunderslaw. Theo, knowing that Bunderslaw, as the Director of Physical Operations knew of every dirty thing that went on at Wayne Enterprises, asks him to tell him the secrets of the company, though first he has Tabitha cut out one of Bunderslaw's eyes. Meanwhile at the GCPD, the Strike Force breaks into one of the Penguin's cash houses, where the people inside processed the money. Although they arrest the men inside, they are suddenly attacked by a man with a rocket launcher. Detective Gordon informs Captain Barnes of a place called The Merc where criminals were getting such weapons.

At Penguin's base, Oswald and Butch think of ways to hurt Galavan. The idea of ​​kidnapping Tabitha crosses their heads, but they are interrupted when one of Cobblepot's underlings appears to inform them about the GCPD raid on the count house. Enraged, Oswald hits the messenger, leaving him half dead, but stops as he got a new idea of how to deal with Galavan. At the GCPD, Leslie convinces Jim to have a double date with Nygma and Kristin Kringle that night at their home, and afterwards he receives a surprise visit from Theo Galavan. Talking alone, Theo confesses to still feel bad about what happened with Jerome Valeska but seeing the confidence people had in Jim, asked his support in the upcoming mayoral election. Though Gordon was flattered by the offer, he rejected it, as he didn't want to get involved with politics. Theo tells him to possibly reconsider his decision.

Later, Tabitha visits Cobblepot, who was visibly more paranoid since the raid of his count house, as he had believed someone had betrayed him. She gives him a list of addresses of buildings that he would have to burn down, and a small box that arsonists were to use. Afterwards, Butch visits Selina asking her to put him into contact with the Pike Brothers, a renowned group of arsonists, who were loyal to Fish Mooney. As she uses to be friends with Bridgit Pike, the sister of the Pike Brothers, Selina takes Butch before the arsonists accept the job. There, Selina realizes that Bridgit was mistreated by her brothers, while Butch closes the deal on the job and gives them the small box. Selina, who had followed Bridgit outside, finds her crying, and tells her to take care of herself and to be strong. At The Merc, Evan Pike visits the store to stock up on Napalm, stuffing some in his pants to steal it. The Strike Force led by Detective Gordon and Captain Barnes arrives, telling everyone to freeze. Evan tries to run to escape, but he was pursued by Gordon and Barnes and he attempts to pull out a gun, though the cops shoot him first and accidentally hit the Napalm in his pants, causing it to explode, and him with it.

That night, Gordon returns home for his double date with Leslie, Kristin and Ed. To his surprise the latter is more relaxed, lively and cheerful and even offers up a toast to their friendship. Upon learning of the death of Evan, the Pikes decide to recruit Bridgit for the fires because they needed someone to go through small vents. Bridgit rejected the proposal because of her fear of fire, but finally accepted the offer after her brothers threaten to throw her into the street and leave her without a family. At Leslie's apartment after the date was over, Jim and Leslie discuss the Galavan's proposal, while Bridgit sneaks into a building, planting the C4 directed by Joe. Once the wick is lit, Joe orders Bridgit to a vault where she used Bunderslaw's eyeball stored in the box to steal an ancient knife. She quickly escapes through the vent, but when the bomb detonates the flames burned part of her leg. Once outside her brothers didn't attend to her at all and she was ordered into the truck, as they still had four buildings left to do that night.

The next morning, with five buildings set on fire, Barnes ordered to Gordon to find some kind of pattern that would show them where the next potential location was. Meanwhile, Bridgit makes a mask and a suit with a fire retardant fabric to avoid being burned again. When Selina arrives to take the knife to Penguin, she warns Bridgit be careful with what she was doing. Inevitably, the visit ends with Selina telling Bridgit to free herself from her brothers, since it was not worth having a family and live as a slave, but Bridgit didn't want to be free if it meant being alone. At his base, Penguin receives the knife that Galavan had ordered him to retrieve, which was engraved with the Wayne family crest. Intrigued as to why Theo would want such a thing, Butch recommends calling an elderly woman named Edwige, who know everything about Old Gotham.

Edwige was summoned, and after seeing the Knife and being threatened by Penguin, revealed that to had a bloody history, since hundred years ago it was used to commit a terrible crime. According to Edwige, at the time, the city was controlled by the five most powerful families: the Elliots, the Kanes, the Crownes, the Dumas, and the most powerful of all, the Waynes. One night Celestine Wayne, a very beautiful girl betrothed to the eldest Elliot boy, was found in an embrace with her lover Caleb Dumas. When Wayne family men found them, Caleb claimed that they both were in love, but Celestine swore by the grave of her mother that Caleb had forced himself on her. Seeking to serve justice, Celestine's brother took the knife and cut off Caleb Dumas' hand. But the conflict did not end there since the Waynes, maddened by anger, seized the possessions of Dumas and socially rejected them. Caleb had to go into exile beyond the seas where a religious act founded centuries ago by the patron saint of his family. The Waynes also forbade the news to mention the Dumas and renamed streets and buildings of their names. The Waynes eliminated the Dumas' history in the city, and the descendants of the Dumas family had to change their name to Galavan.

At the GCPD, Jim discovers that all the buildings burned belonged to Wayne Enterprises so, assuming that the arsonists followed a pattern, he deduces that the next target will be the Gotham City Book Depository. At Penguin's base, Penguin and Butch have a talk about loyalty. Oswald, using the mental reprogramming by Victor Zsasz forces Butch to drink his favourite alcohol against his will. Realizing that Theo's desire for revenge against the Waynes made him vulnerable and emotional, Penguin instructs Butch go to Galavan and ask for a job claiming that he has gone mad, so he could infiltrate the organization and find his mother. Knowing that Theo would not buy the story otherwise, Penguin takes a cleaver and, inspired by the story of Caleb Dumas, cuts off Butch's hand. That night, Detectives Gordon and Bullock have a stakeout outside the library, with the Pikes pulling up outside the book depository soon after. Selina is crouched on a fire escape nearby. Bridgit, wearing her fireproof mask, suit, and armed with a flame thrower, gets out of her brother's truck ready to do the job. The Strike Force quickly appear to stop Bridgit, and the Pike Brothers drive off, abandoning their step-sister. Bridgit panics and has no choice but to use the flamethrower to keep the officers at bay. Officer Luke Garrett unexpectedly appears behind her, grabbing her in an attempt to stop her. Both begin to struggle, and Luke is eventually set on fire. To the officer's horror, Luke is enveloped by the flames and while Gordon puts Garrett out and calls for an ambulance, Bridgit escapes thanks to Selina's who had been watching from above on the fire escape.

At the GCPD, Theo Galavan arrives shaking hands with several of the officers. Within minutes later, Captain Barnes comes out of his office to convey the sad news about the death of Officer Garrett. The entire Strike Force feels the death of Garrett hard, which prompts Captain Barnes to tell them they are going to use all the legal methods at their disposal to capture Garrett's killer. Feeling overwhelmed by the situation, Gordon meets with Galavan to inform him that he would support him in the election only if he helped them in catching the new types of criminals who were appearing. Theo shakes his hand assuring him that he would fulfill that promise. That night, Theo returns home and finds a hooded man dressed in a monk's robe by the fire. He quickly recognizes him as Father Creel, a figure from his past who he had not seen for a long time. After a hug, Theo hands him the knife and reveals that he would soon have Bruce Wayne after all the pieces are put into place. Father Creel accepts the news, because after waiting two hundred years, they could afford to be patient. Knowing that the day of redemption was near, Creel informs him that their brothers are already crossing the seas, warriors unlike the city has ever seen, and that Gotham would be redeemed in blood, and Bruce Wayne would die. 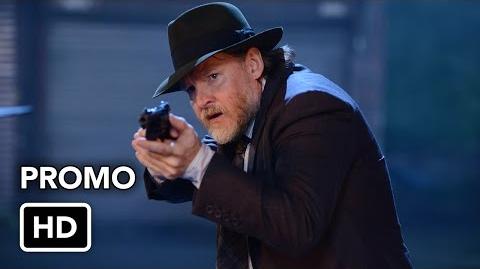 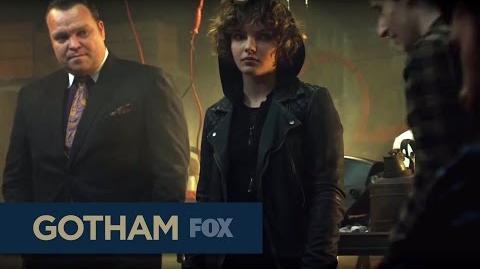 GOTHAM Hello, Again from "Rise of the Villains Scarification" 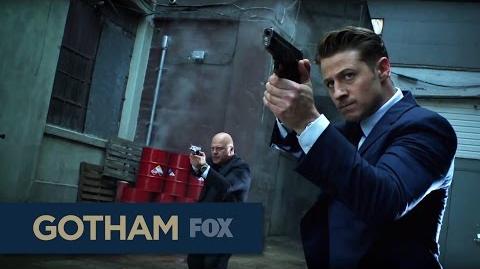 GOTHAM An Explosive End from "Rise of the Villains Scarification" 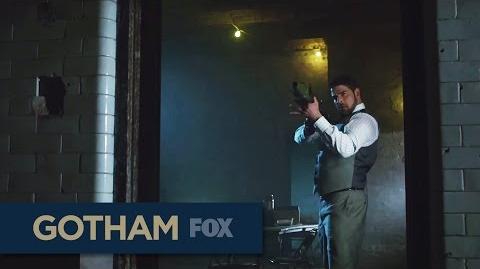 GOTHAM Rocket Launcher from "Rise of the Villains Scarification"