"First, I would like to thank this city for the immense trust it has placed in me. I'm eager to get to work. I'd also like to address the recent attempt on my life by the man known as Penguin. It is true that he attacked me, and as of now, he is still at large. Men such as Penguin will no longer be tolerated. These are men who scurry from the light of decency like cockroaches. Men who... not even a mother could love."
—Theo Galavan to the citizens of Gotham City

"Rise of the Villains: Mommy's Little Monster" is the seventh episode of the second season of Gotham. It aired on November 2, 2015.

Butch leads Penguin and his men to the warehouse where Gertrud is being held, as Penguin plots his revenge on Galavan for kidnapping his mother. Meanwhile, Nygma deals with the aftermath of a deadly accident.[3]

Penguin, Butch and several of his men arrive at the port to access to the building where Gertrud Kapelput was being held prisoner. After finding a lack of security on the scene, Penguin tries to free his mother, but suddenly Theo and Tabitha Galavan arrive to let him know it was pointless, as only the key which Theo held would free her. Angered by what they did to his mother, Penguin orders Butch to shoot both Galavans in the head, though Butch instead shoots the two other men Penguin had brought with them. After discovering that Tabitha had reversed Zsasz's conditioning on Butch, Oswald went down to his knees to beg for his mother's release, telling the two that he'd do anything. Theo then agreed to let Gertrud go, having Tabitha let her out. Getrud ran into his arms, the two happily embracing, though the moment was short lived as Tabitha stabbed Gertrud in the back. Afterwards, Theo orders Butch to kill Penguin, though Penguin calls Galavan a coward, also bringing up the Dumas family history. Theo then relents holding Penguin at gunpoint, though he takes advantage of the situation by using the knife Tabitha had used to stab his mother to cut Theo's neck, and escape through the window, dodging several of Tabitha's gunshots.

Edward Nygma wakes up in his apartment after murdering Kristin Kringle the previous night. He is immediately confronted by his dual personality, who confessed to taking control of his body while he was sleep the previous night, and hiding the corpse of Kristin somewhere in the GCPD, challenging him to find it, following a series of puzzles, beginning with one in an envelope marked with a question mark. At the Galavan's penthouse, Theo watches the news confirming that he'd be the new mayor of Gotham. Knowing that they were close to fulfill their true goals, he commands Silver to make sure that no one else was whispering in Bruce Wayne's ear until he made his offer for the latter's company. Theo then turned his attention to Penguin, who they still had to deal with. Though Tabitha offered to handle it, Theo declined her off, as he was about to become mayor and as such he would have an army at his disposal, and it was time to use it.

With Galavan set to win the election, Theo and Harvey Dent arrive at the GCPD to inform Captain Barnes of Penguin's attack on Theo's life, telling the GCPD officers that Penguin attacked him when he refused to agree to an alliance between the two. However, Detective Gordon was quick to point out that reaction seemed extreme, even for someone like the Penguin, though his comment is not taken into account because Dent gives the Captain an arrest warrant for Cobblepot, as well as search and seizures on all his properties and associates. Due to the recent events that had occurred throughout the city, Judge Turnball declared a state of emergency, giving the Mayoral office additional powers, with Theo announcing that he'd be implementing a curfew, and would be ordering the Strike Force to do door-to-door searches until Cobblepot was found and captured. Hesitant against the idea of martial law, afterwards Theo reminded Gordon that he said that they needed to go after men like Penguin with every method at their disposal. However Gordon retorted that people still needed to trust them, which wouldn't be so if they were policing through fear, Galavan then told Gordon that citizens would trust them, and reminded Jim that he had come to him, before leaving.

Meanwhile, Selina Kyle sneaks into Wayne Manor to see Bruce but is surprised to find him with Silver. After introducing the two, Bruce went to go tell Alfred to set another place at lunch for Selina, at the request of Silver. A few minutes later, Silver threatened Selina, telling her not to come around anymore, and that she was Bruce's only friend. Nygma returns to the GCPD to follow the clues left by his altergo to find the body of Kristin Kringle. After nervously searching, he finally finds Kristin's hand in a vending machine, under her initials, KK. At the Galavans' penthouse, Theo Galavan prepares for his celebratory dinner as the new Mayor of Gotham, though before leaving, he assures Tabitha that they would not have to worry about finding Penguin, as his anger would cloud his better judgement and he'd come to them himself. Later, Oswald sees Theo on television at his conference, where Theo addresses Penguin's attack on his life, and states that men like him would be no longer tolerated. He then compares Penguin to a cockroach and states that men like him are men who not even a mother could love.

Thanks to Bullock's informant, Detectives Bullock and Gordon leave for downtown as they had heard of Penguin and Butch's falling out, and that Butch had put together his own crew. Before they leave, Gordon receives a key to Leslie's apartment, as she didn't like getting up late at night to unlock the door for him. At Wayne Manor, Silver praises Alfred's tea, and afterwards asks Selina about herself. However, Selina asks Bruce if he's really buying Silver's acts, and then proceeds to insult her. Silver then leaves with tears in her eyes, and Selina tries to tell Bruce that even though she knew he wasn't the best judge of character, Silver was bad news. Bruce however, angry at what Selina had done, told her that he wanted her to leave. Bruce then told her that he might not be the best judge of character because the entire time he had thought she was his friend, though she had no idea what that meant. At the GCPD, Nygma examines Kringle's hand until he finds a clue in it that leads to the the medical examiner's lab.

On patrol outside Butch's base of operations, Gordon shares his recent suspicions of Theo Galavan with Bullock, because Penguin attacking the Mayor didn't make any sense, and the number of events that had managed to turn Galavan from a completely unknown to the Mayor, didn't add up. The two then are presented with an opportunity to get into Butch's hideout. Inside, they see several high caliber guns, and they encounter Butch along with several of his men, who refuses to tell them why Penguin went after Galavan. However, everything changes when Victor Zsasz and his crew arrive, announcing that they were there for Butch. When his men flee and Gordon and Bullock threaten to leave him alone to deal with Zsasz, Butch finally confesses that the Galavan made Penguin assassinate the mayoral candidates and set the fires as he had kidnapped Penguin's mother for leverage. Before telling them the fate of Gertrud Kapelput, Zsasz and his crew started shooting from outside, forcing Gordon and Bullock to use the weapons inside to defend themselves. After Zsasz relented and left, Gordon and Bullock were surprised to find Butch gone, with his fake hand left in the hand cuff.

Bruce visited the Galavan's penthouse firstly encountering Theo, who complimented his moral compass and noted the similarities between the two. However, the two are interrupted when Silver arrives happy to see him again. Meanwhile, Penguin prepares his men for their assault that night, making it clear that only he was allowed to kill Galavan. That night, several GCPD officers led by Gordon were prepped as they were going to provide security for Galavan's victory celebration. Later, the party begins with balloons everywhere and cheers from the attendees, and Harvey Dent then proceeded to present the new Mayor of Gotham to the public.

Back at the GCPD, Nygma breaks into the medical examiner's lab, where he finally finds Kristin Kringle's body. To his misfortune, Leslie arrives, surprising him, and covers his actions by saying that he came in to take notes for a case. Though he eventually switches to saying he was hoping to catch her alone, as him and Kristin had a fight, inviting Leslie to go and grab some coffee so Leslie could give him some advice. At Theo's party, Theo takes a moment to talk to Jim and tries to get some information about Gordon's encounter with Butch. However the Detective pretends to not have discovered anything. At that time a large group of men, all dresses as Penguin, walk towards the party to carry out the attack, though one of the impostors is quickly shot by Tabitha from the roof with a sniper rifle.

The Penguin impostors burst into the party and start to kill several attendees, and on the roof Martinez tries to arrest Tabitha but she subdues him with her whip and kills him, digging her heels in his throat. With the commotion and bodies everywhere, Jim escorts Theo out a back exit to a car, though upon reaching their destination, he finally comes face to face with the Penguin. The two faced off, and Galavan ordered Jim to execute Penguin, but the Detective refuses since he knew that Galavan had Penguin's mother killed. Bullock arrives, and aims his gun at Penguin from behind. Penguin tries to warn Gordon about Theo's real plan, which involved a person Jim cared about, but Penguin is unexpectedly shot in the shoulder. Detectives Gordon and Bullock shoot at Tabitha on the roof while Oswald takes advantage of the confusion to steal Theo's car and escapes, with the two Detectives shooting at the car as he drove away.

Afterwards, Jim talks with Bullock about the casualties of the night, blaming Theo for what happened that night as the latter participated in press conference. At the Galavan's penthouse, Silver confesses to Bruce having felt very lonely until the two met, and they both ended up kissing, without knowing that Selina was watching from the outside. Having finished the press conference, Theo confronts Jim and exposes his disappointment to him for not having complied with the order. However, the Detective reaffirms his determination to take down the monsters of the city, starting with the new mayor. At the GCPD, Nygma returns to retrieve Kristin Kringle's body, and his alter ego appears, he then asks Nygma how it felt when Thompkins walked in the room. After Nygma stated that he was terrified, his alterego pointed out that he got away with it, though Nygma said that it wasn't the point. However his alterego emphasized that it was exactly the point. Nygma's dual personality then pointed out the rush Nygma had felt, and asked him how it felt staring at the edge of uncertainty and peering into the void. Nygma then told him it felt beautiful, and the two personalities merged, and with a big smile and Nygma used a drill to begin getting rid of Kringle's body. 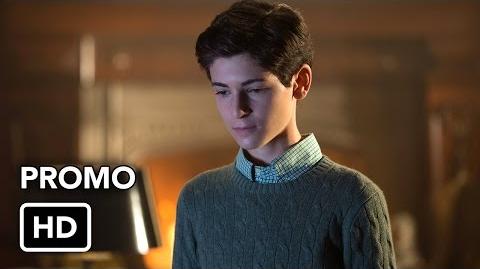 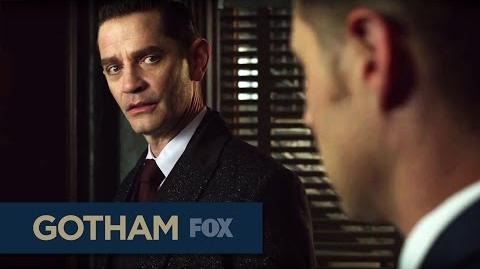 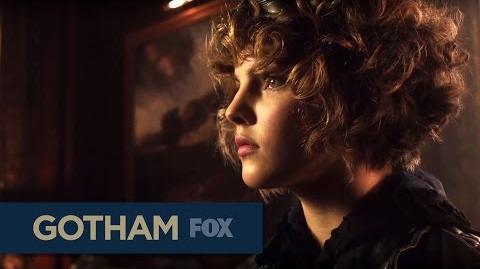 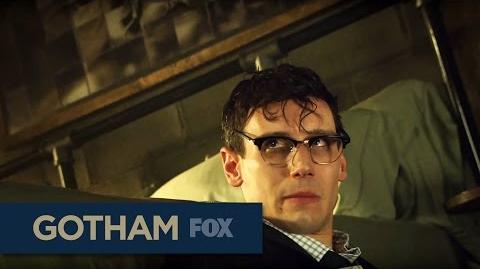 Retrieved from "https://gotham.fandom.com/wiki/Rise_of_the_Villains:_Mommy%27s_Little_Monster?oldid=76369"
Community content is available under CC-BY-SA unless otherwise noted.