"Rise of the Villains: Knock, Knock"

"Oh! Time to go. But don't worry. We'll be back very soon. Hang on to your hats, folks. 'Cause you ain't seen nothing yet!"
—Jerome Valeska to the citizens of Gotham City

"Rise of the Villains: Knock, Knock" is the second episode of the second season of Gotham. It aired on September 28, 2015.

On the heels of his reinstatement, Gordon is thrust onto the high-profile case tracking the deadly inmate escape from Arkham Asylum. Meanwhile, Galavan plans his next move, while Bruce asks for help from his father’s old friend to unlock the secrets in his office.[3]

At the Galavan's penthouse, Theo Galavan tells Mayor Aubrey James, who has a box covering his head, that in front him was a glass jar containing a tarantula. Continuing on, Galavan gave the Mayor two options, option B being that he speak to his secretary Maggie on the phone, and tell her that he ran away with a woman, and would be sending written instructions soon, or option A, was that Theo would open the hatch on the front of the Mayor's box, dropping the spider inside and closing it inside. After asking the Mayor which option would it be, James begged him for option B. Satisfied, citing that it was human nature, Galavan opened the hatch on the Mayor's box showing him that there was no spider, though if the Mayor didn't do what he asked, he'd wish there was one. After Mayor James asked why Galavan was doing this to him, Theo explained to him that he was apart of a great endeavor, and that monsters were coming to Gotham, who'd cleanse the city in blood and fire. The next day, employees of the Gotham Gazette witness several bound captives falling from atop of their building to their deaths. On top of the building, Jerome Valeska and the rest of the escaped Arkham Asylum inmates dropped their captives on the ground below to spell out MANIAX! while Tabitha Galavan supervises them from afar. At the GCPD, newly appointed Commissioner Essen puts Detective Gordon in charge of the Arkham breakout case.

At Galavan's penthouse, Theo Galavan congratulates the group for their work at the Gotham Gazette, afterwards he begins to instruct them regarding the theatrics of their performance. Soon after, Barbara Kean and Tabitha arrive in the room, torturing Mayor James with a whip, as they were bored. To placate her impatience, Theo begins to ask Barbara questions about Jim Gordon. At Wayne Manor in Thomas Wayne's lair, Bruce and Alfred look around the cave, interested. Determined to get the lowdown on what his father was working on, Bruce turns on his father's old computer, but while the computer was starting up, Alfred begins to destroy the computer fearing for Bruce's life. Devastated by the loss of his father's research, Bruce decides to fire the butler for the action. At Galavan's penthouse, Jerome and Robert Greenwood have a face off, with a chainsaw and a sword, over who was the leader of the group. Theo presented a solution to the dispute, and offers a gun so the two could play Russian Roulette to decide who the leader was. Jerome eventually comes out victorious, to Theo Galavan's excitement.

Gordon goes to the bar that Bullock was employed at to visit him, intending to ask his friend to return to the police, however Scottie Mullen arrives, extremely against the idea. After trying but failing to convince Bullock to return to the force, Bullock gives him a clue towards his case. Bullock asks him why the Maniax had chosen the specific shipyard that they had. Jim later obtains the license plate number and description of a fuel truck that The Maniax stole, and reported the news to Commissioner Essen. The two then had a discussion in Essen's office, where Essen told Gordon that she told him it was a new day in the GCPD. At Wayne Manor, Bruce and Alfred bid each other goodbye, with Alfred leaving for the train station.

In the city, Jerome, and the rest of the Maniax, in order to further make their presence in Gotham known decide to hijack a bus full of cheerleaders. At the GCPD, Nygma attempts to invite Kristin Kringle on a date, though due to his own nervousness, he fails. His dual personality soon emerges, claiming that she'd like him as he was confident, and ladies loved confidence. The dual personality infuriated Ed to the point where he screamed at him to away, with a police officer entering as he was doing so. Minutes after the Maniax had taken over the bus, and drenched the inside with gasoline, Jerome failed to ignite the bus, as his lighter had failed. Arnold Dobkins attempted to try his, but Gordon and his colleagues quickly arrive at the scene. The Maniax and the GCPD have a shootout, with Jerome eventually ordering Aaron Helzinger and Robert Greenwood to get the truck started, leaving Dobkins to light the fire. Jim sneaks up right behind Dobkins, making him drop the lighter which ignites the gasoline. He quickly knocks Dobkins out with a punch, and gets into the bus, driving it away from the fire to save the lives of the cheerleaders on the bus. Later after the cheerleaders were safe, he questions Dobkins as to discover who set him free, but Tabitha shoots Dobkins with a sniper from afar, before he can talk.

Alfred waited at the train station ready to leave the city, but Bruce appears and told him that he didn't want him to leave, but there was nothing Alfred could do to stop him from continuing his father's work. He then told Alfred that he was either with him or against him, prompting Alfred to tell him that he had always been with him. Bruce then asks Alfred to make him ready to face the dangers he'd be facing, promising to train every day and even go back to regular school. Alfred agreed, though on the condition that Bruce must do what he say, when he said it, with no exceptions. However after agreeing to Alfred's conditions, Bruce told him that in exchange he must find someone to fix the computer he had broken. At the GCPD, Detective Gordon and Captain Essen watched Dr Thompkins perform an autopsy on Dobkins' body, and after Essen questioned why they had went after cheerleaders, Gordon reached the conclusion that the Maniax were looking to cause mass panic, and wanted headlines. Elsewhere, Alfred sat a bar alongside Lucius Fox, eventually telling Lucius a story from his past of a friend who he had done a favor for, and then the friend had betrayed him, causing Alfred to have to beat him. Alfred told Lucius that he needed to confide and him, but if it turned out that he couldn't trust him, he was a dead man.

At the GCPD, Gordon received an unexpected call from Barbara. Soon after, he sports in the GCPD, and begins to pursue her. Meanwhile, the rest of The Maniax enter the GCPD disguised as policemen and Jerome corners Essen in her office while the rest of his team opened fire, killing several policeman. Fortunately, Nygma manages to save Kristin Kringle before she was shot, and Leslie saves herself by hiding in the medical examiner's room. Outside, Barbara has Gordon chase her to an alley where he is surprised by Aaron Helzinger, who brutally attacks him, leaving him on the verge of blacking out. Barbara orders Helzinger to stop, and then kisses Jim's bloodied face, before hinting at what had happened back the GCPD, and leaving with Aaron. When the massacre at the GCPD ended, Jerome and Greenwood recorded Essen, who they had tied to a chair. In addition to spitting on him and head butting him in the nose, Essen tells Jerome he would soon die and that no one would remember his name, which angered him. Later Gordon returns to the GCPD, where after discovering that Lee was okay, found Essen lying on the ground, shot and dying. With her last breathe, Essen reminded Jim that it was a new day in the GCPD.

In the cave, Lucius fixes the computer while Bruce asks him if his father told Lucius everything related to his research, though Lucius told him no, and that his father was a quiet man and he only helped with technical resources. Bruce thanked Lucius for his help, and Lucius reveals that he loved Thomas Wayne and regretted that he never told him so, or helped him more. Alfred quickly enters to alert Bruce of what had happened at the GCPD. Both quickly there, and Bruce apologizes to Gordon for the way they he treated him the last time they met. Telling Gordon he had been a really good friend, Bruce hugged Gordon. Afterwards, Gordon entered Essen's office where seconds later, Bullock arrived, deciding to return to force despite Scottie's opposition towards it. The two were then informed by Officer Zeke that they need to see something, who turned on the news, as they had obtained the video Jerome had recorded. In the recording, Jerome told the public that they were all prisoners of sanity, and they needed to wake up, and furthermore they hadn't seen anything yet. 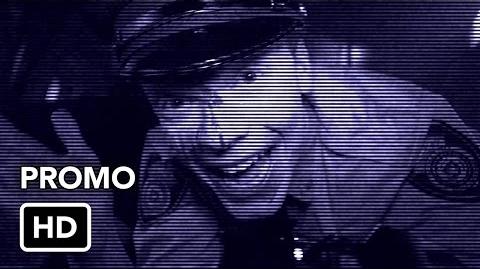 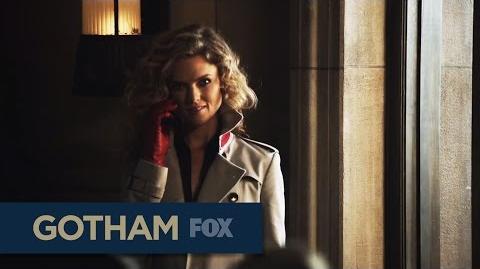 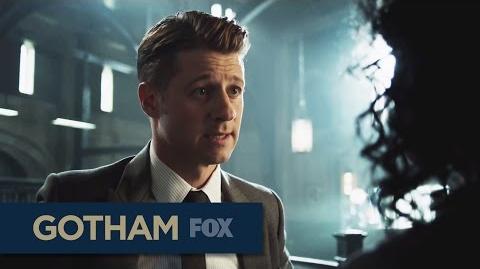 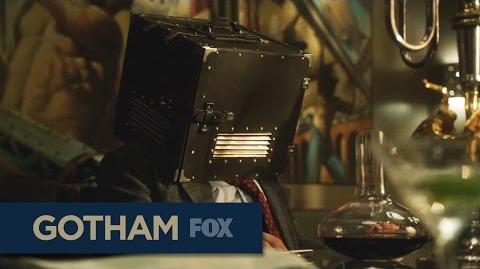 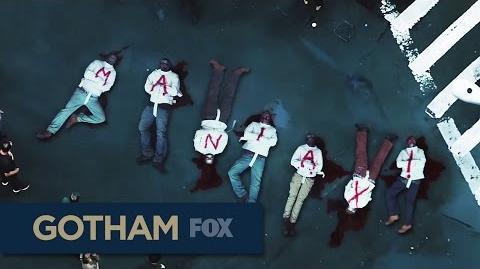 GOTHAM Maniax from "Knock, Knock"
Add a photo to this gallery

Retrieved from "https://gotham.fandom.com/wiki/Rise_of_the_Villains:_Knock,_Knock?oldid=79060"
Community content is available under CC-BY-SA unless otherwise noted.