"Rise of the Villains: By Fire"

"Cale flamed up good, but it was Joe who burned the brightest."
—Bridgit Pike to Selina Kyle

"Rise of the Villains: By Fire" is the sixth episode of the second season of Gotham. It aired on October 26, 2015.

After Bridgit Pike rejoins her brothers, a new spark of courage ignites within her, as she chooses to take control of her future. Meanwhile, Kringle and Nygma’s relationship will take a new step and Penguin and Galavan continue to battle for control of Gotham City’s underworld.'[3]

Butch goes before the Galavans and Barbara looking for a job after Penguin's paranoia had cost him his hand. Theo is reluctant to hire him because he had several capable two handed men, though Butch points out that they didn't know Gotham as he did. Theo then changes his mind after Barbara and Tabitha agree, excitedly suggesting things to put on his stump. Behind them, Theo has a congressman on a stack of books and a rope tied around his neck to convince him to support his mayoral campaign.

In the city, Detective Gordon pursues and captures Nino, a known arsonist to get the name of the Officer Garrett's killer. His interrogation, despite being fruitless, causes Strike Force members, Sal Martinez and Josie Mac to inform him they they had to report him to Captain Barnes. At Selina Kyle's residence, Bridgit tries to keep her mind busy by cleaning because she didn't know what do with herself. Selina points out that's the point of being free, and tells her friend to get out of town, afterwards suggesting a way to get her some money after Bridgit says she has none.

Later, they go to an auction house where gangsters and pimps bought young girls. There Bridgit tells Selina that they need to help the girls, but Selina reminds her that they were there to help her. Armed with the flamethrower, Bridgit ventures into the auction and took the audience hostage until her and Selina taken the money that they had come for. The two then fled, with Bridgit caught up with the adrenaline rush she had gotten. At the GCPD, Gordon's behavior was reported to Captain Barnes, who puts a note in his file, then harshly berates him, telling him that they never beat suspects. After asking him if his interrogation had gotten him any leads, Barnes showed him the video of the robbery that had taken place at the auction house, with Gordon recognizing Selina Kyle in the footage.

At Wayne Manor in Thomas' cave, Alfred and Bruce had a sparring session, in which Alfred told him to him that his enemies would fight dirty, putting Bruce in a choke hold. Bruce then bit Alfred to free himself, and voiced his impatience for Lucius Fox to repair his father's computer, as he was ready to begin. However, Alfred told him that he'd tell him when he was ready, and though Bruce emphasized that he was, Alfred proved otherwise hitting him in the nose, after distracting him with the information that Silver St. Cloud had called to invite him to dinner at her house.

At the GCPD, Edward Nygma reaches the archive room and listens in on the conversation Kristin Kringle was having with Leslie Thompkins. Firstly discussing Tom Dougherty, she then moved onto her relationship with Ed, telling Leslie that he was too gentle, and that she felt as if he was holding something back from her. Ed then enters the room, handing her a cup of coffee and giving her a riddle to invite her to dinner at his house that night.

Meanwhile, Detective Bullock interrogates Ivy Pepper about the whereabouts of Selina Kyle, and though she refused to talk at first, Bullock gives her an ultimatum: either he calls the children's home to come and get her, or gets her a candy bar and forgets to get someone to watch her.

Elsewhere, Selina and Bridgit prepare for the latter to board a bus out of town, but suddenly Joe and Cale Pike arrive in their van, with Joe grabbing Bridgit and putting her into the van against her will. Cale attempts to hold Selina at gunpoint, but Selina quickly subdues him, taking the gun, though he escapes back to the van and drives off. Selina returns home intending to go and rescue Bridgit, but Detective Gordon arrives, breaking into her home. The two momentarily have a face down, guns pointed at each other, but when questioned about Bridgit, Selina informs Jim that Bridgit was forced to burn down the buildings by her brothers, and it was their fault that Officer Garrett was dead. Gordon commits to doing everything possible to bring the Pikes justice while keeping Bridgit safe, though Selina has to stay out of it.

Meanwhile at the Pike apartment, Joe and Cale chain their stepsister to a radiator, counting the money she had. Joe then tosses several firecrackers at her to teach her a lesson for trying to abandon them. Bridgit is finally released, after she agrees to being apart of their family again. However before ordering her to go make their dinner, Joe warns her that if she tries to escape again, he'll kill her and skin Selina.

At Penguin's base, Butch returns to Penguin having a mallet in the place of his hand, with no news about the whereabouts of Penguin's mother. After making sure his conditioning was still in place, Oswald ordered Butch to find his mother, threatening to cut off his other hand. At the Pike's apartment, Bridgit, finally tired of her brother's abuse, puts on her arson suit, and sets the two on fire with her flamethrower without any remorse. Later, Detectives Gordon and Bullock arrive at the apartment where they found the two charred bodies of Joe and Cale. Gordon and Bullock then went over the evidence, with Gordon questioning why they were burning down Wayne Enterprise buildings.

Meanwhile, Butch searches Theo Galavan's office for a clue about the whereabouts of Gertrud, but is surprised by Theo's appearance. Galavan quickly tells Butch that he knew that Butch was looking for Penguin's mother, and asks him how Penguin had got him to cut off his own hand. Butch then reveals to Theo that he had been brainwashed and was Penguin's servant, prompting Theo to call upon Tabitha to help Butch. Though Butch tries to attack her, Tabitha quickly takes him down with her whip.

Detective Gordon returns to the GCPD with information he had obtained about Bridgit and tells Captain Barnes that he had made a promise to his informant to keep Bridgit safe, but Barnes not caring about the promise, told him to find her and take her down.

Meanwhile, Selina finds Bridgit on the rooftop fixing her suit. She insists that Bridgit leave town, noting how she had killed her brothers, and a change in Bridgit's personality. Bridgit then confessed her plan to go after the "pervs and the bullies", who hurt people like them. Selina then told her friend to look after number one, which was herself, and not to be crazy or else she'd get killed. However, Bridgit told Selina not to worry about her, though Selina told Bridgit she didn't, she just thought she was being dumb. Selina then wishes her good luck and leaves, though she quickly comes back and embraces her, telling Bridgit that she'd see her around.

That night at the Galavan's penthouse, Bruce has dinner with the Galavan family, somewhat uncomfortable after Tabitha comments on how cute he and Silver are.

Meanwhile at his apartment, Ed and Kristin also eat dinner together and he seizes the moment to try to confess his secret, but she cuts him off, and the two sleep together.

At the GCPD, Gordon receives a call from Selina who after making sure he remembered his promise, told him where Bridgit was going.

Elsewhere, Bridgit returns to the auction house, setting the auctioneer on fire and freeing the captured girls. The girls quickly flee, and Bridgit follow afterwards. Outside, the Strike Force led by Detective Gordon and Captain Barnes waited for Bridgit. To avoid confrontation, Jim tries to reason with Bridgit for her to stop, as they could working something out as she was a juvenile, though she refuses to listen and uses her flamethrower. An officer instinctively shoots and breaks one of the fuel pipes on her suit which leaks out. Bridgit then uses her flamethrower to blow up a squad car, though the fire from the explosion ends up reaching her, causing her to catch on fire. Back at the Galavan's penthouse, Theo confesses to Bruce, that he was aware that Bruce's father had been a good man, but despite that, bad things happened at Wayne Enterprise. He then commented that Bruce was mature for his age, and ready to handle the problems that were going on at Wayne Enterprises, though he would need some help. He then offered to be that person once he became Mayor.

At Penguin's base, Butch, completely wounded, arrived to confess to Penguin that he had found his mother, though he had gotten caught looking. He then told Penguin that Tabitha had wanted to take her time with him, and chained him up, though he had escaped. As they didn't know he was there, he told Penguin that they had to go get at that moment. With no time to lose, Oswald went to go prepare his men to retrieve his mother. At Leslie's apartment, Selina sat across from Leslie with a gun pointed at her. Gordon arrives there, apologizing to Lee about the situation. Soon after, Gordon regretfully informs Selina about the death of Bridgit, and although he tried to help her, she didn't want to go quietly. With her eyes full of tears and outraged at Gordon, he questioned her as to who had hired the Pikes to set the fires. Citing that Gordon didn't care about people like them, she told him that it wasn't as if he'd go after his "little friend", revealing it to be Penguin.

At Ed's apartment after relations with Kristin, Ed finally decides to open up to her and confesses his secret about the death of Tom Dougherty. At first she takes it as a joke, but when Ed shows her his badge, Kristin realizes that it was all true. Immediately, she begins to tell him that he was sick and a psychopath. While trying to escape, Nygma corners her against the door and covers her mouth with one hand while squeezing her neck with the other. As his grip on her neck tightened, Ed tries to explain that he did it for her, as he loved her, but seconds later he realizes that he has accidentally killed her in the process.

At Penguin's base, Cobblepot and his men prepare to go and get his mother. Elsewhere, Selina mourns the death of Bridgit and Edward wallows in despair over the lifeless body of Kristin Kringle. However in Arkham, under the Indian Hill toxic waste dump, Bridgit's body is pushed on a stretcher to a secret facility, as the suit she had been wearing melts to her, making her fireproof, so she had been sent there with the rest of the monsters. Still alive, Bridgit looks with her side eye at the host of inhumane atrocities going on. She then sees the sign, revealing it to be Indian Hill, a division of Wayne Enterprises. 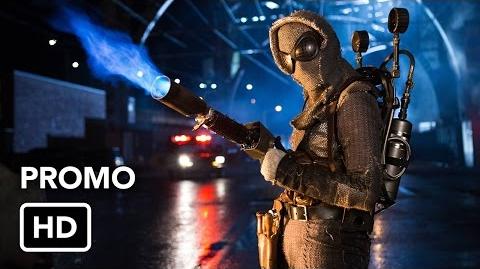 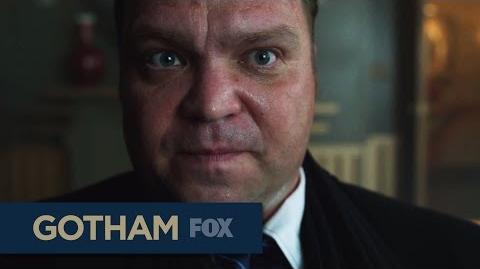 GOTHAM Cracking Up from "Rise of the Villains By Fire" 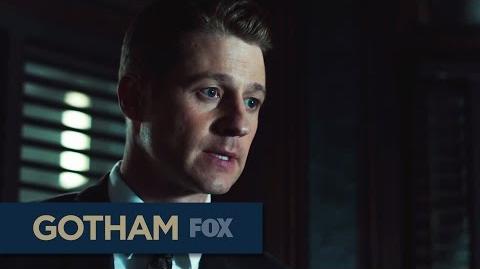 Retrieved from "https://gotham.fandom.com/wiki/Rise_of_the_Villains:_By_Fire?oldid=75746"
Community content is available under CC-BY-SA unless otherwise noted.