"This Penguin is a nobody, you want to start a war over the guy who carried your umbrella?"
—Carmine Falcone to Fish Mooney

"Penguin's Umbrella" is the seventh episode of the first season of Gotham. It aired on November 3, 2014.

As violence between Maroni and Falcone continues to escalate, Penguin reveals a new component of his manipulative strategy, forcing Gordon to deal with the consequences of his decision to spare Penguin's life.[1]

The reappearance of Oswald Cobblepot in Gotham stirs trouble. When Fish Mooney discovers that he is still alive, she is livid, and orders Butch to bring Gordon to her.

At the GCPD Gordon is in the locker room, attempting to call Barbara on his cell phone, but is forced off the phone when Bullock punches him and aims his gun at him, hoping to placate Don Falcone by killing Gordon. Gordon admits that he messed up, but he has a plan to fix it, and needs Bullock's help. In disgust, Bullock turns around and says Gordon is already a dead man, and likely Bullock is too.

Gordon rushes back to Barbara's penthouse and finds her being held captive by Butch and another gunman. Gordon quickly defeats both of them, then takes Barbara to the bus station and pleads with her to leave the city for a few days. She reluctantly agrees.

Later, Gordon returns to the GCPD, to everyone's surprise. Sitting at his desk as if it's just another day, he asks Alvarez for several blank arrest warrants signed by Judge Bam Bam.

At a warehouse, Falcone meets with Fish and Nikolai, while examining crates of chickens. Both of them argue that allowing Cobblepot to remain alive would be a sign of weakness, but Falcone dismisses them. The most he will do is allow Fish to ask Maroni, politely, to hand over Cobblepot. Meanwhile, he will be sending Victor to retrieve Gordon.

As they are leaving the meeting, Nikolai whispers in Fish's ear, asking why they shouldn't make their move against Falcone. Fish says Falcone's very lack of concern is worrying her; either the Don is a senile old fool, or else he knows something they don't.

Captain Essen asks Jim what he is doing at the office, when he knows Falcone will be hunting for him. Jim calmly informs her that he has warrants for the arrests of Mayor James and Falcone, for perversion of justice in the Wayne murder case. Essen says he must be insane, as there is not one cop or attorney in the city who will support him, including herself. She urges Gordon to leave the city, but he refuses.

Victor Zsasz and two female assistants arrive at the GCPD. He calmly states to the room that he is there to retrieve Gordon on Don Falcone's orders, and if everyone stays out of their way and goes about their business, no one will get hurt.

Gordon steps out of Essen's office and refuses to meet with Falcone, reminding Zsasz that he is outnumbered by the cops in the room. Zsasz nonchalantly orders everyone else to leave, which they do. Only Essen hesitates, but Gordon tells her to go, as she has a family. Once the room is emptied of cops, a shootout ensues between Zsasz and his assistants on one side, and Gordon on the other. Gordon is wounded in the side, but escapes to the parking lot. He is almost cornered, but a female officer arrives, distracting Zsasz long enough for Gordon to find cover. Suddenly an unmarked car roars into the parking lot and Montoya and Allen tell him to get in, Allen firing back to hold off Zsasz. The car speeds away, and Victor ruefully executes the wounded female officer as punishment for making him lose his quarry.

Hours later Gordon wakes up in Gotham University's medical school, where Dr. Thawson, a friend of Montoya and Allen's, has managed to treat his gunshot wounds. Allen explains that they brought Gordon there because Falcone's men will be watching the local hospitals. The doctor says Gordon must rest for at least two days, but he refuses and insists on rising immediately.

At Bamonte's, Fish meets with Maroni to ask for Cobblepot's return. Maroni says "Penguin" may be only a small cog in his organization, but Maroni finds him amusing and is reluctant to give him up. Instead, he tells Cobblepot to offer Mooney a sincere apology for however he may have offended her. Cobblepot does, but Mooney isn't satisfied, swearing that there will be "bloodshed."

The detectives' car is parked in the woods outside Wayne Manor. While Allen goes to the house, Montoya apologizes to Gordon for suspecting him. She admits that her feelings for Barbara may have clouded her judgment more than she believed, but now that she knows Gordon is an honest cop, she is glad they are on the same side. Then Allen appears beside the car, being held in a bruising joint lock by Alfred, who wanted to verify Allen's claim that they are friends of Gordon for himself.

Inside the Manor, Gordon tells Bruce that Gordon is in danger, but he wants to assure Bruce that, if something happens to him, Montoya and Allen will carry on the investigation into the Wayne murders; Gordon says he has told the detectives everything he knows about the case, and he believes they are 100% reliable, which Allen affirms. Upset, Bruce hugs Gordon before they leave, not wanting him to die.

Maroni's men, led by Frankie Carbone, assault one of Falcone's warehouses, killing Nikolai in the process, and stealing a small fortune in weapons and money. Penguin, who has accompanied the raid, congratulates himself for being right, but Carbone turns on him, saying that Maroni may not be smart enough to see how Penguin is manipulating him, but Carbone is, which is why he plans to kill Penguin and report to Maroni that he was killed in the raid. Penguin is quite unconcerned, and Carbone is astounded when his own men seize and disarm him. Penguin explains that Carbone's problem is that he loves money too much, which means he doesn't pay his own men enough, and all Penguin had to do to turn them was to offer them a raise. He then stabs Carbone in the stomach, killing him.

Falcone and Maroni decide to meet at the port to iron out their differences. They offer each other condolences for the deaths on each other's side. Falcone proposes a truce, allowing Maroni to keep Cobblepot in exchange for Maroni's warehouse by the river. Penguin whispers in Maroni's ear, and Maroni decidesto give Falcone the Indian Hill waste disposal site instead. That night, Gordon hides out at Barbara's penthouse, while preparing a small arsenal with which to carry out his suicidal mission to arrest Falcone. To his surprise, he is visited by a somewhat drunk Bullock, who, having decided that he is dead no matter what, agrees to go out in a blaze of glory and help Gordon.

The next morning, the two detectives intercept Mayor James in his limousine, and serve him with the warrant for his arrest, before using him and the limo as cover to drive onto the grounds of Falcone Manor without being stopped.

Gordon and Bullock storm into the Manor, and hold Falcone and his bodyguards at gunpoint. Falcone shakes his head, saying he thought Gordon had more common sense. He then explains to Gordon that he is sadly mistaken about the situation: he has come after Falcone because he believes he has nothing to lose, but he is wrong. Barbara never left the city, instead she came directly to Falcone to plead for Gordon's life, and is now being held prisoner there by Mr. Zsasz. Gordon says Falcone is lying, and Falcone rejoins that if Gordon is sure of that, then he might as well arrest him now - but if he is telling the truth, Gordon will be condemning Barbara to death.

Reluctantly, Gordon lowers his gun, and Falcone calls for Zsasz to bring Barbara in. Mayor James, having no appetite for bloodshed, hastily excuses himself, claiming to be late for an urgent appointment.

Falcone says that, for threatening him, Gordon and Bullock should die, but he hates to order that, when Gotham needs police officers of bravery and integrity like them. Falcone admits it is something of a dilemma, but the fact that Gordon trusted his word is an encouraging start, and he lets them go.

Later, Falcone tests the muffins that Liza has prepared for him, and walks outside into the rain to crumble and feed them to his chickens. Penguin arrives, holding an umbrella over both of them. Falcone says his arrival is apt, as Falcone was just thinking about the day they first met:

In flashback (prior to the conclusion of the first episode), Falcone confronts Penguin, who has been condemned to die for snitching to the MCU, asking if Penguin has any last words or requests. Penguin has only one: that Falcone give the job of killing him to Gordon, the one man who might be persuaded to spare his life. Falcone asks why he would agree to that, and Penguin says that if his life is spared, then he will be Falcone's snitch for life, spying on his enemies. As proof of his worth, Penguin offers up a valuable secret: that Fish and Nikolai only pretend to hate each other, when in reality they are lovers, and plotting Falcone's downfall. Falcone acknowledges this information's value, and agrees to Penguin's request.

In the present, Falcone marvels that everything has worked out exactly as Penguin predicted; Gordon spared his life, he is now securely placed in Maroni's organization, and even provided a perfect way of getting rid of Nikolai. However, Falcone says he still has doubts about letting Gordon live; he only did so because Penguin requested it. Penguin thanks him for sparing Gordon, assuring Falcone that, sooner or later, Gordon will be on their side. 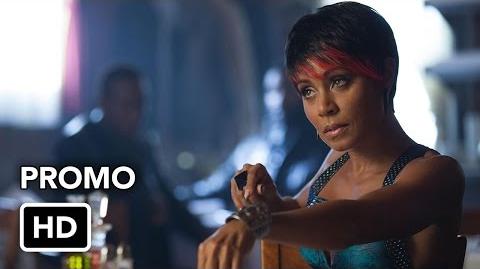 Retrieved from "https://gotham.fandom.com/wiki/Penguin%27s_Umbrella?oldid=70806"
Community content is available under CC-BY-SA unless otherwise noted.