"A win?! There's two children out there with professional assassins coming after them. Bruce and Selina could end up dead."
—Detective Gordon to Harvey Dent

"Lovecraft" is the tenth episode of the first season of Gotham. It aired on November 24th, 2014.

Following a misstep, Gordon is reassigned to duty at Arkham Asylum. Meanwhile, Selina leads Bruce Wayne on a perilous journey through Gotham to evade the assassins after her.[1]

A mysterious woman reaches the Wayne Manor Gardens, and quickly takes down the gardener, using his blood to wipe on her forehead. Inside the manor, Selina decided to teach Bruce a balancing technique on the rail. When she ends up asking Bruce if he wants to kiss her, just trying to be "nice", Bruce rejects the offer, telling her that he doesn't believe that she's a nice person, and doesn't think she cares much for other people. Downstairs, the woman knocks on the door of the manor, deceiving Alfred into believing she has been in an accident. When she spots Selina, she decides to shelve the facade, and Alfred orders Bruce and Selina to run while he tries to subdue the intruders. Together, Bruce and Selina end up escaping the manor while Alfred is shot in the shoulder, trying to run after the assassins. After chasing after them to no avail, Alfred calls out for Bruce, but he's gone.

Later, Gordon and the rest of the police arrive at the manor, and Bullock discovers Gordon and Harvey Dent's plan to try to solve the murder of the Waynes. This causes an argument, but Alfred quickly silences them, because their only priority should be finding Bruce. Jim suggests that the murderer may have been sent by Lovecraft, so he asks Bullock try to find Selina and Bruce as he tries to get Lovecraft to call of the assassins.

Elsewhere, Bruce and Selina make their way to the city, still trying to escape the assassins. Bruce's only thought is to get into contact with Alfred, to make sure he's okay.

Meanwhile, Falcone has Penguin abducted to find out if Maroni was responsible for the robbery of his money, at the armory. Oswald vehemently denies to Falcone that Maroni had anything to do with the robbery. Instead, he suggests that Fish Mooney is involved, and has a mole close to Falcone. Despite Falcone doubting this, due to Cobblepot's hatred of Fish, Penguin offers to find the mole.

Gordon confronts Dent to find out how the assassins knew that Selina Kyle was the surprise witness of the Wayne murder case. Reluctantly, Dent confesses to leaking the name to give credibility to the rumor. Given that Lovecraft can't be found anywhere, Dent gives Jim the addresses of several of Lovecraft's condos that he has under the name of his mistress to try to find him.

At the GCPD, Alfred accompanies Bullock in, interrogating Mackey, a known associate of Selina. Alfred bribes Mackey into confessing that Selina had been working with a new fence, and that Fish Mooney would know who the fence was.

At Falcone Manor, Falcone has summoned all his lieutenants for a lunch, in which he ran kills Bannion for failing to secure the armory. As the blow has cost them dearly, Falcone tells them all that their tariffs will be raised 25% until the reserves can once again be killed. He also warns them that once he finds the person who had robbed him, they will wish that they could die slow like Bannion did.

Once Bruce and Selina reach the city, Selina tries to get rid of Bruce to keep him safe, knowing the assassins after pursuing her, not him. After Bruce dares to chase after her, jumping from one building to another following her, she agrees to let him hang with her, under the condition that he does what she say. Later, she takes him to get some new clothes at The Flea.

At her nightclub, Butch Gilzean confesses to Fish that he's worried that Falcone will discover their part in the robbery of his vault, but Fish convinces him that this is the time to deliver their blow to Falcone. A few minutes later, Alfred and Bullock reach the club, asking to speak to Fish, but she only arrives after seeing Alfred subdue, then hold a knife to Butch's throat. Under the opinion that helping find Selina would counterproductive to her own personal interests, Mooney initially refuses to help, until Alfred appeals to her honorable side, convincing her to get them the name of Selina's fence.

Meanwhile at the Flea, Bruce meets a friend of Selina's, Ivy Pepper, daughter of Mario Pepper. After her mother's suicide, Ivy ran away.

Gordon goes to Lovecraft's condo, and finds the entrepreneur there, fearing for his life. Lovecraft denies having sent the murderers after Selina as they were also chasing him. At the precise moment when Lovecraft tries to reach the documents proving his non-involvement in the Wayne murder, the female assassin enters the apartment, subduing Gordon after the two engaged each other in battle.

Upon waking hours later on the floor of the condo, Gordon receives a call from Bullock informing him of the children's location, The Factory, where Selina's fence was based at. Standing up, Gordon begins to search for Lovecraft, but finds him in his bathtub, dead from a gunshot from Gordon's own gun.

At the Factory, Selina comes to Clyde to try to sell some items she had stolen from the manor, however Clyde instead imprisons Bruce and Selina, having made a deal with the assassins. Immediately, the two begin to stack everything in the room to try to reach the hatch in the skylight roof. At the same time, the assassins arrive at the factory, having come for Selina. Bruce and Selina hide when one of the killers comes into the room, and Selina is able to incapacitate the man. The two try to hide from their pursuers as Bullock and Alfred arrive at the Factory, opening fire against the assassins. Hearing the voice of his butler, Bruce is separated from Selina, while Gordon arrives at the scene with other police to assist in the effort. In the midst of the shooting, Selina manages to escape. The female assassin corners Bruce and holds a gun to his head, trying to get Selina's whereabouts out of him, but he only says she's gone. The assassin tells Bruce not to confuse bravery with good sense. Moments later, Bruce and Alfred are reunited, and the two embrace.

The next day Gordon and Dent are lectured by Mayor James about Lovecraft's death. Before the media could circulate the story of his murder, the politician decided to pass it off as suicide because of the pressure of Gordon's accusations. The mayor then told them that one of them would have to be a scapegoat, picking Gordon, as Dent knew how to walk the line. When the news about Lovecraft's death is made public, Gordon is relieved from his duties as a detective and sent to work as a security guard at Arkham Asylum. Without further ado, he says goodbye to Bullock and Ed, and leaves to start his new job.

That night at Wayne Manor, Bruce receives an unexpected visit from Selina who has come to return the items she had stolen. To Bruce's surprise, she kisses him before she leaves.

The next day Gordon arrives at Arkham Asylum, prepared to start his new job. 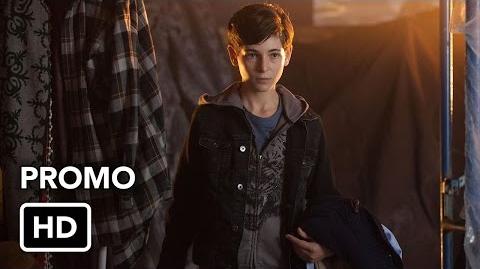 Retrieved from "https://gotham.fandom.com/wiki/Lovecraft?oldid=68974"
Community content is available under CC-BY-SA unless otherwise noted.