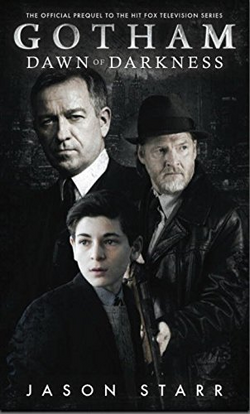 GOTHAM is an American crime-drama television series from Warner Bros. Television developed by Bruno Heller, based on the characters from DC Comics in their Batman mythology - centering on a young Bruce Wayne, then-detective James Gordon, Alfred Pennyworth, a pre-Catwoman Selina Kyle, as well as a rogues gallery of burgeoning villains before they became known as the Penguin, the Riddler, the Scarecrow, Two-Face and more.[1]

A break-in at Wayne Manor. The death of a masked intruder. Amid the seething crime and corruption of Gotham City, Thomas Wayne fights to protect his family and his company from forces unknown. While detective Harvey Bullock investigates the incident as a simple burglary, Wayne discovers that the threat may come from his own dark past.

Peeling back layer upon layer of secrets, this is the official prequel to the hit television series.[2]

At 2 A.M. Thomas Wayne sits in the secret underground portion of his study, slowly realizing that he is hearing strange noises coming from his study. After making a brief call to the Gotham City Police Department, he arms himself with a handgun and goes up to find a ransacked study. Making his way into the foyer, he encounters three men wearing Halloween-styled masks. After a brief shootout, he manages to badly wound one of the masked individuals, and drive the two others away. Just when Thomas thinks everything is okay, he finds that he has taken for granted the badly-wounded intruder who is about to shoot him, foreshadowing Thomas' complacency as seen with his death in the alley. Just when he thinks it is the end for him, Alfred Pennyworth steps in and puts an end to the intruder.

Before sunrise, Harvey Bullock and his week-long partner Amanda Wong arrive at the Wayne Manor to investigate the incident. Harvey gets chastised by Amanda after he briefly flirts with Lacey White the newscaster, who is on the scene to inquire about the rumors surrounding the robbery. After a long conversation with the Wayne couple (in which Harvey notes that Alfred Pennyworth is a sniper and Martha Wayne is quite attractive), the detectives quickly depart from the scene, noting that the incident doesn't quite fit the pattern of the recent art thefts that have been plaguing Gotham.

At noon, work begins on repairing the damage wrought by the robbery. Thomas Wayne asks Alfred about the condition of Nigel the gate guard for the Wayne Manor, who was knocked unconscious during the incident and is still currently in the hospital. Thomas brings up the possibility that he was involved, a subject which angers Alfred due to his previous association with Nigel. Later, Thomas gets into a discussion with Bruce Wayne and his reaction to the events that have transpired. Bruce reiterates his fascination with monsters as manifested through the eyes of the book Grendel. He also discusses a growing anger with injustice, and how criminals need to be punished. Bruce concludes that he prefers math and science over literature in school, as a true solution can be found with the first two, while there is no simple one for the last. Before he is dismissed, he once again asks permission to take boxing lessons with Alfred, but is rejected outright by Martha. Martha brings up the possibility that the robbery was an inside job, which gives Thomas an idea.

Back at the GCPD on that same afternoon, Harvey and Amanda get to the Forensics Department to find some more answers about the man that was killed by Alfred Pennyworth. Edward Nygma quickly explains the background of the intruder after a quick riddle relating to the man's name. The intruder Byron Stone had been a former inmate of Blackgate Penitentiary after being released only two weeks prior. Harvey quickly remembers the time he was arrested, and how Stone had worked as a freelancer for just about every faction around, Sal Maroni and Carmine Falcone included.

Thomas recruits the services of Frank Collins, a former GCPD detective turned private investigator, who had been kept on a retainer by Thomas for the past 10 years as a way of helping keep Hugo Strange and his machinations in check. Thomas remembers the awkward years where he allowed Strange to operate unchecked, followed by the years after, where he funded the various victims of Strange's experiments who over time either died of sickness and natural causes or just gradually disappeared. Frank points out that Thomas should check up on Karen Jennings, the only living survivor of Pinewood Farms. Thomas agrees and after a brief discussion about the break-in, he heads home. But after a series of attempts to contact Karen on the phone fails, he breaks off and heads toward her hideout instead.

Retrieved from "https://gotham.fandom.com/wiki/Gotham:_Dawn_of_Darkness?oldid=75984"
Community content is available under CC-BY-SA unless otherwise noted.