For the city district after which this episode is named, see Arkham District.

"Arkham" is the fourth episode of the first season of Gotham. It aired on October 13th, 2014.

As a contentious city council vote on the future of the Arkham District approaches, politicians from both sides are in danger. Gordon and Bullock must race to protect the council and an old friend visits Gordon.[1]

At Barbara Kean's penthouse, Oswald introduces himself as "Peter Humboldt", an old friend of Jim, who recently had come back to Gotham. Jim walks him out to the street, where he furiously berates him for coming back, telling him that Falcone will kill them both if he finds out that Oswald is still alive. However, Oswald replies that Gotham is his home and he couldn't go anywhere else. He then offers to work for Gordon as his underworld informer, telling Jim that though Fish Mooney and even his own partner Harvey Bullock have lied to him, Oswald would never lie to him. Oswald then tells Jim of a brewing war that will soon arise. Jim asks what this war is about, and Oswald replies that it is all centered around "Arkham". A couple of teenagers then arrive, laughing and shouting, giving Oswald the opportunity to take off.

Elsewhere, City Councilman Jenkins and his advisor are approached by a man who claims to be one of his constituents. He shows the consultant a strange telescopic device and asks him to look through it. However, the telescope turns out to be a murder weapon, from which shoots an iron spike that pierces the consultant's eye. Panicking Jenkins tried to run away but is caught by the killer and killed with the same weapon.

The next day, Captain Sarah Essen assigns the case to Gordon and Bullock. However, Harvey is unmotivated and would like to end the case quickly. Jim believes that it was a political act, though Harvey disagrees, reasoning that councilors are much cheaper to bribe than to assassinate.

At her club, Fish Mooney is auditioning a young woman. She sings well, but Fish says she is looking for something more than a singer. Fish then asks her if she is into men or women. When the girl replies that she likes men. Fish tells her to pretend Fish is a man and seduce her. However, the singer fails and is dismissed. Butch Gilzean asks why, since the girl was pretty and a good singer, but Fish tells him that she isn't looking for a pretty girl, she's looking for a weapon.

Gordon and Bullock interrogate the first suspects in Jenkins's murder. Though Bullock initially suspects Nicky, Gordon believes him innocent. Back at his desk, Gordon finds a box of evidence brought to his desk about the Jenkins case, including a booklet advertising the Wayne family's plan for the Arkham project.

At a press conference, Mayor James presents the plan that Thomas and Martha Wayne had for the redevelopment of Gotham's Arkham District: to demolish the slums and build low-income housing.

At Wayne Manor, Gordon meets with Alfred to ask for more details about the Waynes' plan for Arkham. From what Alfred tells him, Gordon deduces that Councilman Jenkins was Carmine Falcone's proxy, and was planning to vote in favor of Falcone's plan. Bruce appears and tells Gordon that his mother wanted to reform the asylum to help the less fortunate of the city.

Outside Arkham Asylum, the same hitman who killed Councilman Jenkins and his aide, has kidnapped Councilman Zeller, who is frantically pleading for his life, swearing to change his vote. The hitman remains impassive, "apologizing" for not making the kill swift and merciful, but his employer insists on sending a message. With that, he pours gasoline into the oil drum where Zeller is bound, and sets him on fire.

The next day the police arrive at the scene, and Gordon shares his theory that the Arkham project has turned into the battleground between Falcone and Maroni, each of them submitting competing plans for the development to the City Council. Edward Nygma arrives and shares an interesting fact with the detectives: Councilman Jenkins and his aide, and Councilman Zeller, both suffered puncture wounds from the same device, meaning the same killer was hired to assassinate both Councilmen. To Gordon, it doesn't make sense: the same killer, killing two men for two opposing sides in a crime war? Bullock takes it in stride, chuckling, "only in Gotham."

At Bamonte's, Oswald is reprimanded by Lou, for peeking at the men counting money in back room.

Gordon and Bullock visit another hit man at a prison, bribing him with two cartons of cigarettes for information about the Councilmen's killer. The prisoner recognizes Gordon's description of the needle device, and says the man's name is Richard Gladwell, and was last rumored to be working out of the Lansky building.

At the Building, Gordon and Bullock arrive to find Gladwell's desk unoccupied, though in the drawers they find evidence that he killed the Councilmen, along with a paper with the letters C, L and M written on it.

At Wayne Manor, Bruce awakes from another nightmare about the murder of his parents. Bruce asks Alfred to get him all the files regarding the Arkham project, looking for a possible connection between the project and his parents' deaths.

At Bamonte's, three masked men burst into the restaurant and steal Maroni's money from the backroom, killing Lou in the process. A few minutes later, Maroni's right-hand man, Frankie Carbone, arrives with reinforcements. The thieves are long gone, but Frankie opens a refrigerator, where Oswald is cowering, clutching a bag of the money that he managed to save.

At Barbara Kean's penthouse, Barbara asks Jim who "Oswald Cobblepot" was. Jim avoids the question, but realizes that Montoya visited his fiancee. He asks Barbara what her connection to Montoya is, and Barbara admits that they had previously been in a relationship that only lasted a year.

At Bamonte's, Maroni angrily announces his plan to take revenge against Falcone to Frankie, and then call over Oswald, praising him for his actions during the robbery and promoting him as the new manager of the restaurant.

Back at the GCPD, Harvey discovers that "Richard Gladwell" was just an identity that the hit man appropriated; the real Gladwell disappeared five years ago, but since the hit man continued paying the rent on his apartment, the landlord asked no questions. The bottom line is, they have no way of identifying the killer, or his next victim. Gordon mentions the paper with the three letters on it, but Bullock says it is a dead-end, and he will tap some of his underworld contacts. Gordon, knowing where Bullock is going, tells Bullock to say "hi" to Fish for him.

At Mooney's Nightclub, Fish is auditioning another young woman, Liza, who, though not as good a singer as the last girl, is a much better seductress. As the audition ends, Harvey arrives and asks what she knows. Fish explains that Falcone is determined to gain control of the Arkham project, because if he were to lose, it would embolden his enemies who believe he is getting old and weak. Harvey notes that she seems positively buoyant at the prospect, and asks why, since Falcone's fall will be hers as well. Fish tells Harvey not to worry about her, she always has a plan B.

At the GCPD, Gordon receives a call from Oswald, warning him that Maroni plans to "hit" another politician that night. Jim counters that all the Councilmen are under police protection, but Oswald says there are ways around that. Jim quickly gets a list of the officers assigned to protect the Councilmen and sees that Officers Campos, Lazenby, and Martins ("C", "L" and "M") have been assigned to the Mayor.

Gordon rushes to the mayor's house and finds all three officers absent, meaning they have been bought off, or worse. Knocking on the Mayor's door, Gordon informs him that someone is coming to kill him, and they need to get away as soon as possible. Mayor James says he has a country house where they will be safe, but refuses to leave without gathering money and documents from his safe first.

Arriving at the Mayor's residence, "Richard Gladwell" prepares his metal spike and forces the door open just as Gordon and James are heading out. Knocked backward, Gordon drops his gun, and he and the Mayor run to another room to hide. Gladwell shoots the lock off the door with Gordon's gun, then attacks Gordon. The fight carries them into a small audience room used for press conferences, and Gordon is almost maimed by the killer's metal spike, before Bullock arrives and aims his gun. The killer releases Gordon long enough for Gordon to reclaim his own gun, while the Mayor huddles in a corner in terror. Trapped, Gladwell says that his clients hired a professional "because he finishes the job", and lunges at the Mayor, forcing Gordon and Bullock to shoot him dead.

Later, Barbara visits Jim at the GCPD, apologizing for not telling him about her past relationship with Montoya. But she still insists on asking who Oswald Cobblepot is. Jim says he can't tell her because it's part of his job, and it was a mistake for him to tell her other things about his job in the past. Barbara gives Jim an ultimatum: either let her in, or their relationship is over.

That night in an abandoned warehouse, Fish Mooney gathers the two singers, forcing them to fight each other for the privilege of working for her. The second singer, Liza, is victorious.

Elsewhere, Oswald visits the three men who robbed the restaurant, revealing that he himself contracted them to do so. One of them notices that Oswald is holding a pastry box, and he says that he brought cannoli as a congratulatory gift. The three robbers dig in enthusiastically, though when one offers a bite to Oswald, he politely turns it down.

The next day the Mayor, as a means of preventing a gang war, announces to the media that he has merged the two project proposals, with Falcone building the low-income housing, while Maroni gets to build a toxic waste disposal site. As for Arkham Asylum, instead of tearing it down and building a new mental health facility, the existing facility will be refurbished and brought up to modern standards.

Gordon confers with Bruce, who is outraged that the Mayor's plan deliberately excludes the building of a new, modern asylum, which was the centerpiece of his parents' plan for Arkham. He feels as if everything they have worked to leave Gotham is now being controlled by criminals. Gordon, however, points out that Bruce is the Waynes' most important legacy, and he is still free from corruption. Bruce asks whether Gordon believes Gotham City can be saved. Gordon is unable to honestly say, "yes," but says with conviction that it is worth trying.

In the abandoned apartment, Oswald steps over the bodies of the three thieves, all of whom have been poisoned with the cannoli, gathers up the stolen money, and leaves. 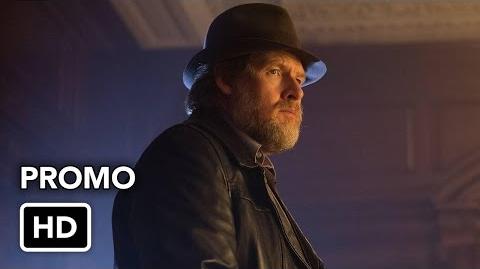 Retrieved from "https://gotham.fandom.com/wiki/Arkham?oldid=67921"
Community content is available under CC-BY-SA unless otherwise noted.